Inside the UC Occupations Guerilla Film Screening: Everything Belongs to Everybody

by dave id
On November 23rd, several short features from various UC Days of Action protests and occupations were projected onto a wall at the entrance to UC Berkeley's Wheeler Hall, site of a student occupation on November 20th, 2009. The guerrilla screening included scenes from actions at UCLA, UCSC, and UCB. Video from the UCSC occupation of Kerr Hall and the UCB occupation of Wheeler Hall are included here. 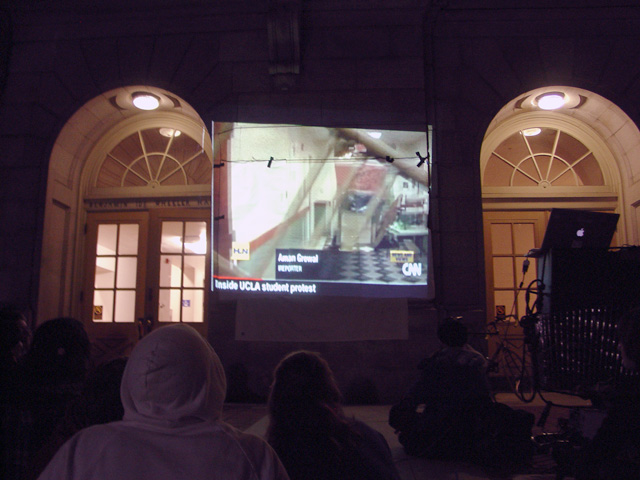 Days of Action Against the Tuition Hikes (includes statewide actions)
http://www.indybay.org/newsitems/2009/11/20/18629379.php
§DEMOCRACY NOW! feature on Wheeler Occupation
by dave id
As UC Berkeley Investigates Police Brutality Against Students Protesting Fee Hikes, a Report From Inside the Takeover of Wheeler Hall

The University of California, Berkeley is investigating allegations of police brutality against students and workers protesting fee hikes and budget cuts last week. 40 students were arrested Friday night after campus police entered Wheeler Hall, which the students had taken over earlier in the day. The students were part of a statewide movement protesting the UC Board of Regents decision to raise tuition by 32 percent. Independent journalist Brandon Jourdan, who was embedded with the students inside the occupied building on Friday, files a report for Democracy Now!
END_OF_DOCUMENT_TOKEN_TO_BE_REPLACED
Add Your Comments
Latest Comments
Listed below are the latest comments about this post.
These comments are submitted anonymously by website visitors.
TITLE
AUTHOR
DATE
won't come out
.
Support Independent Media
We are 100% volunteer and depend on your participation to sustain our efforts!