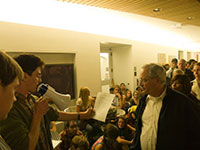 On Wednesday, November 18th, hundreds of UC Santa Cruz students occupied the Kresge Town Hall following large rallies against a 32% tuition hike. The rallies obstructed the two entrances to the UCSC campus for several hours. On Thursday, UCSC's Kerr Hall, which contains the offices of the administration, vice-chancellors, and chancellors, was also occupied by students as part of the Days of Action Against the Tuition Hikes. Hundreds of students occupying the lobby created a list of demands which was read and given to UCSC's Executive Vice Chancellor David Kliger and Vice Chancellor of Student Affairs Felicia McGinty.

On Friday afternoon, hundreds of students, faculty and staff rallied outside Kerr Hall. After a general assembly on Friday evening, students issued a rebuttal to statements made by UCSC EVC David Kliger and also "edited their demand list for a more immediate satisfaction." The Occupy California website also reports that as of Friday evening, "The administration has cut off internet completely" which "potentially demonstrates the administration’s attempt to silence occupiers" and has "damaged student journalists’ ability to report information."

The occupations continued into the weekend. On Saturday, students attempted to negotiate with the administration, but their consolidated demands were rejected. CNN reported, that according to UCSC spokesman Barry Shiller, the administration intends "to wait out the takeover" and "hopes the students will leave voluntarily." The administration used a different line with the students, promising to send in police no later than midnight to break up the occupation. Students barricaded themselves inside Kerr Hall and a large number of supporters rallied outside throughout the night.

The occupation of Kerr Hall ended on Sunday morning. By 6:50am, UC Police and Santa Cruz County Sheriff's Officers clad in riot gear arrived at Kerr Hall to disperse demonstrators. A press release from Occupy California reports that at one point during a confrontation, students and neutral faculty observers were cornered by riot police on an outdoor balcony. As the police advanced towards the students and faculty, one faculty member fell from the balcony, injuring his back.

In order to enter the building, the front and back doors to Kerr Hall were cut by the Fire Department. Everyone inside, approximately 50 people, exited out a back door. Students chanted, "We'll be back!" as they marched to the Kresge Town Hall for a rally. The occupation at Kresge Town Hall ended after the rally.