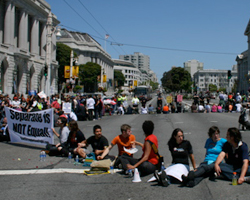 At 10am on Tuesday May 26th, in a 6-1 decision, the California Supreme Court's ruled in favor of Proposition 8 banning future same-sex marriages but upholding existing same-sex marriages. In the one dissenting opinion, Judge Moreno stated "This could not have been the intent of those who devised and enacted the initiative process. In my view, the aim of Proposition 8 and all similar initiative measures that seek to alter the California Constitution to deny a fundamental right to a group that has historically been subject to discrimination on the basis of a suspect classification, violates the essence of the equal protection clause of the California Constitution and fundamentally alters its scope and meaning."

Street actions to protest discrimination are taking place throughout the day in California and elsewhere in the nation. Most actions took place at 6pm, but immediate action upon the announcement took place in Los Angeles, Sacramento, San Francisco and Palo Alto. In San Francisco, police arrested more than 150 protesters for blocking the intersection of Van Ness and Grove near City Hall shortly after the ruling was announced.

On Saturday, May 30th, a rally of California-wide advocates for national LGBT equality will be held in Fresno. Organizers chose Fresno for its location in the middle of the state and because California's Central Valley population is more representative of "middle-America" attitudes. They say that the struggle for full equality for gays and lesbians has to be won in towns like Fresno, and not just in LGBT-friendly metropolitan areas.