Add an Event
Newswire
Calendar
Features
Home
Donate
From the Open-Publishing Calendar
From the Open-Publishing Newswire
Indybay Feature
Publish to Newswire
Add an Event
Related Categories: California | San Diego | Government & Elections | LGBTI / Queer
Over 70 Activists Occupy San Diego County Clerk’s Office, Demand Marriage Licenses
by Mark Gabrish Conlan/Zenger's Newsmagazine (mgconlan [at] earthlink.net)
Thursday May 28th, 2009 6:09 PM
Over 70 marriage equality activists occupied the office of the San Diego County Clerk Wednesday, May 27 as a protest against the California Supreme Court’s ruling that Proposition 8, which restricts marriage in California to one man and one woman, is constitutional. Michael Anderson and Brian Baumgardner led the action by demanding a marriage license, and other Queer couples followed suit. The event ended peacefully, with no arrests, when the crowd dispersed an hour after the official closing time of the building. 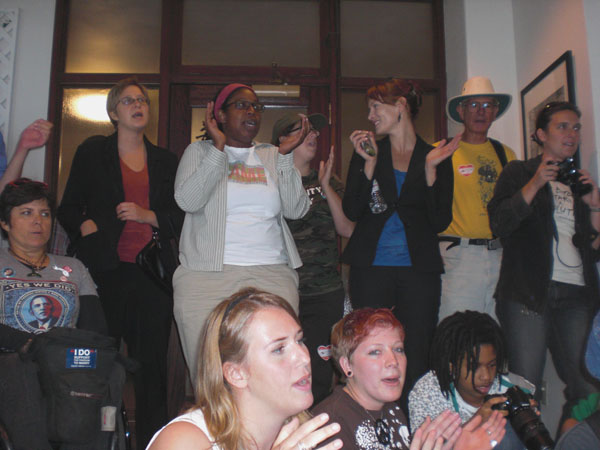 Why Can’t Michael and Brian Get Married?

“Today, where celebrations are taking place, instead are rallies, protests and marches,” said Michael Anderson inside the San Diego County Clerk’s office Wednesday afternoon, May 27. “At a time when we should be planning our weddings, we are planning a resistance. Instead of planning our vows, we must write speeches. Instead of standing at the altar, we are forced to stand for our right to be at the altar.”

Anderson and his partner of eight years, Brian Baumgartner, made themselves the focal point of San Diego’s latest protest against the passage of Proposition 8, which banned marriage between same-sex couples in California, and the May 26 decision of the California Supreme Court upholding the measure. They agreed to be the first couple to go to the clerk’s office and demand a marriage license, then sit down and refuse to leave the office after they were denied one. Other Gay and Lesbian couples, individuals (including at least two who were already legally married to same-sex partners in California during last year’s 4 1/2-month window of opportunity) and non-Queer allies joined in.

At the height of the action, over 70 people crowded into the waiting area inside the clerk’s office. According to Lisa Kove, strategic planning chair for the San Diego Equality Campaign, one of the organizations sponsoring the action, County fire marshals said there were too many people in the room for safety; and Kove, agreeing with them, did not contest it when they ordered some of the people to leave. The protesters had said throughout the day that they would not leave the building when it closed, and would accept being arrested in classic civil-disobedience fashion. In the end, however, no one was arrested and the building was cleared by 6 p.m., an hour after its usual closing time.

During the early part of the action, participants passed around manuscripts and took turns reading aloud from them. Among the readings were Martin Luther King, Jr.’s famous defense of the civil rights movement, “Letter from a Birmingham Jail”; a 2007 statement by Mildred Loving, an African-American woman who along with her white husband were the plaintiffs in the 1967 case Loving v. Virginia, in which the U. S. Supreme Court ruled state bans on interracial marriages unconstitutional; and an article about the 1969 riots at the Stonewall Inn bar in New York City, commonly (though inaccurately) thought of as the beginning of serious Queer activism in the U.S.

Later in the day, people involved in the sit-in were given a chance to speak to each other and explain why they were there. “I’m a Gay, married human male, married to another human male,” said Drew Searing, member of the San Diego Alliance for Marriage Equality (SAME) and the San Diego Coalition for Peace and Justice. “My husband and I had a beautiful, wonderful wedding last summer, and it just breaks my heart that some of my brothers and sisters can’t participate in that.”

“I’m here because I refuse to be a victim of intolerance, hatred and discrimination,” said a young man named Justin who fought back tears as he spoke. “I was actually in Massachusetts a few years ago, when their Supreme Court passed a ruling that said that Gay men and women could get married. I watched two of my best friends marry people that they had been with for years, that they loved and they wanted to spend the rest of their lives with, … I look back at pictures from my friends’ weddings and ceremonies, and it just really makes me think, like, what does that leave for me?”

“I am here with my girl Kim, and we tried to get a marriage license today, and they said no,” said Sasha. “I’m here for my brothers and sisters from the past, for all of you today, for everybody who was there last night [at the march and rally against the Proposition 8 ruling that attracted over 4,000 people], and for future generations. It’s gotten so much better since 40 years ago, since 10 years ago, since five years ago, and it just needs to keep on getting better. It’s up to us to do it, so that’s why I’m here.”

“Ditto,” said Kim. “I’m not one for public speaking, by any means. I don’t really like much attention, so this is kind of a big step out for me. I love Sasha. I want to spend the rest of my life with her. And I think it’s absolutely ridiculous that anyone is trying to deny us the equality that we deserve. That’s it.”

A man named Keith introduced himself as a representative of the national organization Marriage Equality U.S.A. and also as a Gay clergy member. Quoting statistics that 50 percent of all heterosexual marriages in the U.S. end in divorce, one out of every five husbands cheats on his wife and one out of every five wives cheats on her husband, Keith said, “The very luxuries that straight people enjoy, that they take for granted, we’re sitting here today and fighting for. The very thing that they toss into the trash, that they don’t take seriously, they’re so quick to divorce over, 50 percent of them trash it, throw it away, we’re fighting desperately to have the same things.”

Howard Freelove, a musician and married heterosexual who said he had worked with many Queer people and become an ardent supporter of Queer equality, said, “I talk to people all the time who voted yes on Proposition 8, and they’re turning around right now. The momentum is happening. In 2010, you guys, you’re going to be able to get married in this state. I know you’re going to have to wait, but let’s suck it up and just do the work that’s necessary, and just talk to everybody. Knock on doors, talk to people on the phone, don’t be afraid to say something.”

“My rights as a Gay person were put up for a vote on the ballot, and my rights were taken away at the ballot box,” said Jonathan Goetz, secretary of California Young Democrats and activist with the San Diego Democratic Club. “And that really scares me. It scares me not just for me, but for any other group that the Republican Party decides is an enemy for this election or that election. And if I’m not willing to stand up and protect my own rights, I don’t know who will.” Goetz linked marriage equality with other progressive causes, including single-payer universal health care and passage of the Employee Free Choice Act (EFCA), which would make it easier for workers to win union representation.

Mainstream media coverage of the action emphasized its rather anti-climactic ending — referring to the protesters’ willingness to leave the building rather than be arrested, the Channel 10 newscaster said, “They caved” — and the inconvenience posed by other people who wanted to get married or access other county services. The San Diego Union-Tribune article on the demonstration quoted Dr. Doug Davis of Salt Lake City, who’d come there to see his son David get married, as saying, “Don’t we have rights, too? They think it’s O.K. to barge in like they have more rights than we do.” David seemed to approach the situation with more equanimity, pointing out to the reporter that, despite the inconvenience, his wedding went ahead as scheduled.

This reporter observed no disruption of county services. Staff members and individuals with business at the clerk’s desk were allowed to pass freely. According to Kove, at least two straight couples who’d come there to get married joined the demonstration in support of marriage equality. Kove also said that the sheriff’s deputies threatened to arrest attorney Charlie Pratt, identifying him as “a troublemaker” even though he had done nothing the other participants hadn’t done and was willing to leave along with everybody else. She suggested Pratt was singled out for his reading of King’s “Letter from a Birmingham Jail.”

While the sit-in was going on inside the county clerk’s office, a parallel demonstration was going on outside the building on the Pacific Highway side which featured an open mike so people could express their feelings about Proposition 8 and the court decision upholding it. Kove, marriage equality activist Sara Beth Brooks and former San Diego City Council candidate Stephen Whitburn took turns MC’ing the event, sometimes going into the building and returning to report on the goings-on inside the clerk’s office. Gradually, however, the crowd outside dwindled down to about 12 people as the focus shifted indoors.

“Until the 1940’s, it was illegal for disabled people to get married,” recalled Linda Kwizdak of San Diego Blind Community Services. “People were fearful of disabled people, and now they are very fearful of homosexuals. … I’ve had a lot of arguments with people who voted for Proposition 8 who say that homosexuality is a ‘choice.’ It’s not a choice to be what you are; it’s only a choice to express what you are.” Kwizdak’s point was echoed by a woman in a wheelchair who spoke to the group inside the clerk’s office and said that her parents had had to fight for her right to attend normal schools instead of being shunted off to separate schools for people with disabilities.

A young man named Gibran Martinez showed up with a piece of duct tape across his mouth and, when it was his turn to speak, removed it from his lips but continued to let it dangle from his left cheek. “I came out seven months ago, and it’s very hard for me to come out to my family,” he said. “I was born and raised in Costa Rica, in a heavily Catholic, military family. Even though we have justices in place to rule over us, no one can judge me. No one can judge us.”
http://zengersmag.blogspot.com
§Inside the county clerk’s office
by Mark Gabrish Conlan/Zenger's Newsmagazine Thursday May 28th, 2009 6:09 PM 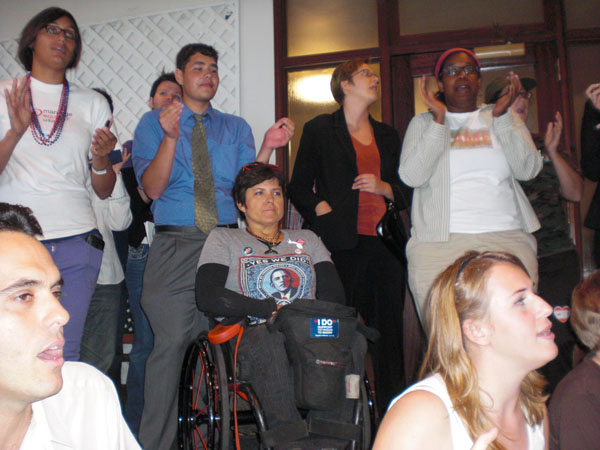 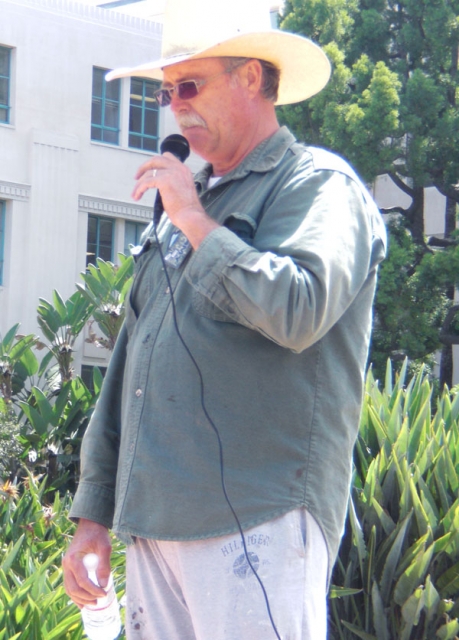 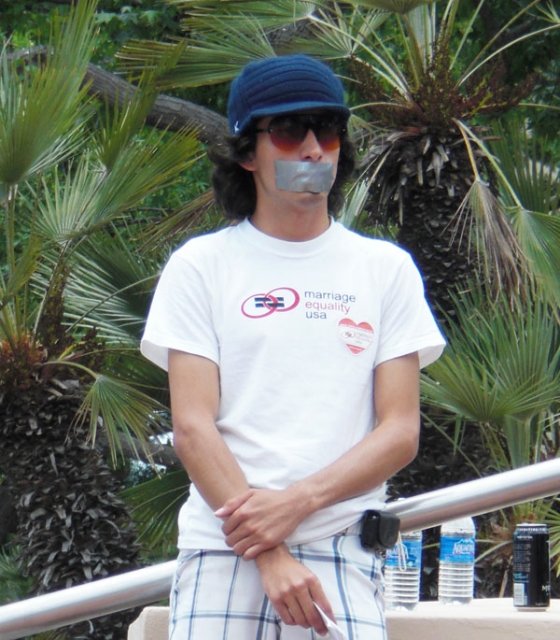 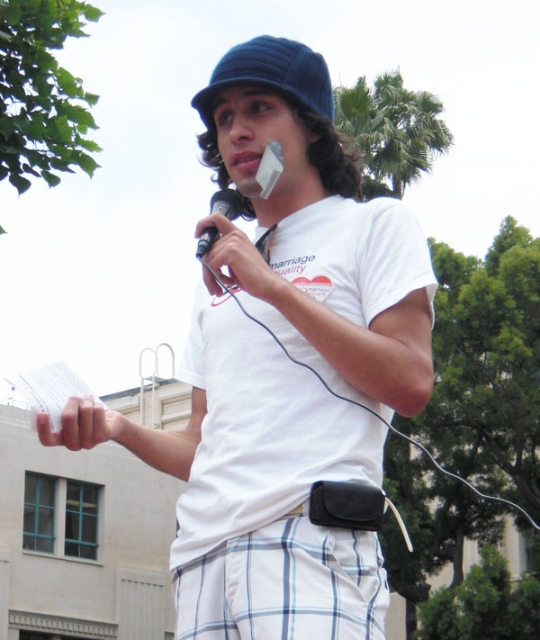 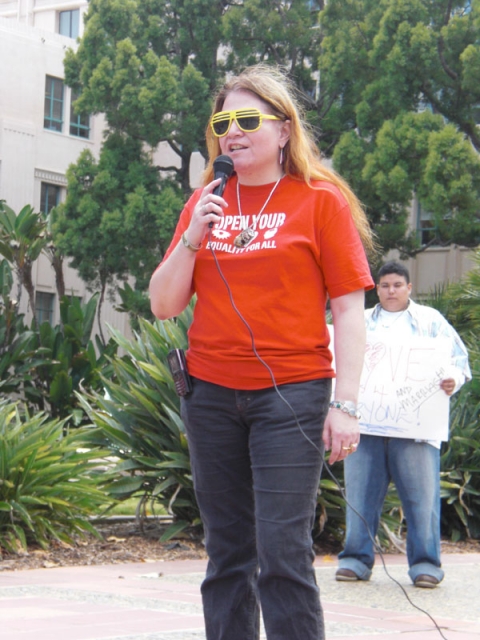 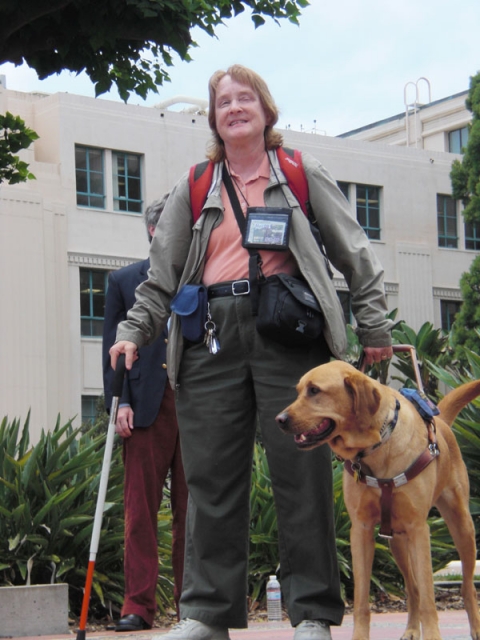 original image (600x800)
http://zengersmag.blogspot.com
Add Your Comments
LATEST COMMENTS ABOUT THIS ARTICLE
Listed below are the latest comments about this post.
These comments are submitted anonymously by website visitors.