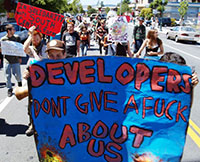 It was a sunny afternoon on Sunday, July 9th, and as part of the international days of solidarity with the South Central Farm (SCF) in Los Angeles, around 60 people paraded through downtown Santa Cruz, carrying colorful anti-development signs and banners, handing out leaflets, taping posters up everywhere, and playing improvised drums.

A majority of sidewalk onlookers were curious and willing to read the handouts, and a few joined in. The rally began at the clocktower and grew in numbers until spilling out on to Front St. Comfortably filling most of the asphalt, the assembly proceeded down Front to Laurel Street, turning to come back northward up the crowded Pacific Avenue drag and finally ending in a courtyard area across from the Post Office. Marchers congregated in the courtyard to listen to speakers, announcements, and a statement from the farmers, broadcasted from the mobile bike cart PA system.

Speakers touched on the topics of public space in Santa Cruz, the current status of the S.C. Farm, related historical struggles, local guerilla farming plans, memories of past spaces lost to developers, the Radcliff Elementary School Garden, local areas threatened by development, and an introduction to seedballs. A large quantity of the clay-based balls, made up of native wildflower seeds, were distributed among the crowd. People went their separate ways with the "seed bombs" in hand, placing them thoughtfully throughout the city as a small guerilla gardening action. Add a comment to this report back

Photos: Signs of Solidarity with the South Central Farm || Developers Don't Give A Fuck About Us