Add an Event
Newswire
Calendar
Features
Home
Donate
From the Open-Publishing Calendar
From the Open-Publishing Newswire
Indybay Feature
Publish to Newswire
Add an Event
Related Categories: Santa Cruz Indymedia | Environment & Forest Defense
PDF's of the handout and poster from today's SCF solidarity rally/march
by urbanites for zucchini proliferation
Sunday Jul 9th, 2006 6:27 PM
Posted here is the text from a leaflet handed out at today's Santa Cruz rally and march in solidarity with the South Central Farm. The text is followed by PDF files of the leaflet and also of an 11x17 poster that was put up throughout downtown during the march. Download, print, and distribute! 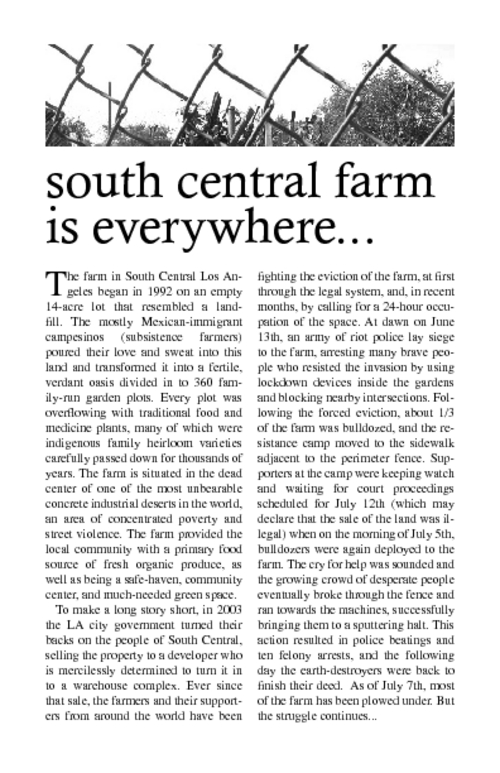 The farm in South Central Los Angeles began in 1992 on an empty 14-acre lot that resembled a landfill. The mostly Mexican-immigrant campesinos (subsistence farmers) poured their love and sweat into this land and transformed it into a fertile, verdant oasis divided in to 360 family-run garden plots. Every plot was overflowing with traditional food and medicine plants, many of which were indigenous family heirloom varieties carefully passed down for thousands of years. The farm is situated in the dead center of one of the most unbearable concrete industrial deserts in the world, an area of concentrated poverty and street violence. The farm provided the local community with a primary food source of fresh organic produce, as well as being a safe-haven, community center, and much-needed green space.

To make a long story short, in 2003 the LA city government turned their backs on the people of South Central, selling the property to a developer who is mercilessly determined to turn it in to a warehouse complex. Ever since that sale, the farmers and their supporters from around the world have been fighting the eviction of the farm, at first through the legal system, and, in recent months, by calling for a 24-hour occupation of the space. At dawn on June 13th, an army of riot police lay siege to the farm, arresting many brave people who resisted the invasion by using lockdown devices inside the gardens and blocking nearby intersections. Following the forced eviction, about 1/3 of the farm was bulldozed, and the resistance camp moved to the sidewalk adjacent to the perimeter fence. Supporters at the camp were keeping watch and waiting for court proceedings scheduled for July 12th (which may declare that the sale of the land was illegal) when on the morning of July 5th, bulldozers were again deployed to the farm. The cry for help was sounded and the growing crowd of desperate people eventually broke through the fence and ran towards the machines, successfully bringing them to a sputtering halt. This action resulted in police beatings and ten felony arrests, and the following day the earth-destroyers were back to finish their deed. As of July 7th, most of the farm has been plowed under. But the struggle continues...

People all around the world have been enraged, inspired, and heartbroken by the story of the South Central Farm, a living model of urban self-reliance and sustainability, demolished by the interests of necrophilic developers.

Here in Santa Cruz, we are up against the same agenda of “progress” and “development”. In the face of a catastrophic industrial onslaught, we must actualize viable and beautiful alternatives - such as community gardens, social centers, and foodsharing networks - while at the same time vigorously fighting the further destruction of the remaining wildlands and free public spaces.

The average urban area has on hand about 2-3 days worth of food. Our utter dependence on commodity distribution networks to provide us with food and other basic necessities is absurdly short-sighted - especially in light of the precariousness of the global economy, and the inevitable crises that loom upon the horizon of industrial society - peak oil, global warming, overpopulation and universal resource depletion. It will benefit us to move towards local structures and methods of obtaining food, not just in the long term, but also for the immediate fulfillment that comes with a more direct connection to our sources of sustenance.

This unusually ecologically-conscious county is home to many community gardens. Some are managed and leased by the city, others are organized autonomously or by nonprofit organizations such as the Homeless Garden Project. In addition, numerous “guerilla gardening” projects have been carried out, taking unused parcels of land and farming on them without permission. New guerilla gardens are currently being planned in the county.

In downtown Watsonville, inspired by the So. Central Farm, teachers and students are starting a community garden on an unused parcel of land on the otherwise barren Radcliff Elementary School campus. Lacking funding from the school administration, they have put out a general call for donations of basic supplies to help them get started. Email operationopal [at] riseup.net if you are interested in helping with this garden.

Autonomous spaces can be temporary, such as our local Guerilla Drive-In or Anarchist Cafe’s, or long-term, such as the Bike Church tool cooperative or the “Werkshop Museum” open artspace downtown.

UCSC Upper Campus is the wild, forested refuge located above the developed portion of the University, and bordered by Henry Cowell State Park, Wilder Ranch State Park, and the Pogonip City Park. The new LRDP (Long Range Development Plan) for UCSC calls for almost double the existing buildings on campus, and much of the planned expansion is aimed at the upper campus area. Learn more about the LRDP and resistance to it at thes “Undo UCSC” website:
http://www.resist.ca/~undo_ucsc/

North Pacific Ave. - At the north end of Pacific Ave, across from the post office, is a bridge over the exposed foundations of what used to be Bookshop Santa Cruz (before the earthquakes struck). There are murals on the old brick walls, the largest one depicts people fleeing in horror from a collapsing city, from the American flag, to the green of communal life in the countryside. This unique public courtyard is now threatened with annihilation by a city-led “eminent domain” purchase-and-sale to a developer to construct a massive complex of luxury apartments, stretching from the sidewalk of Pacific all the way to the sidewalk of Cedar Street.

Arana Gulch is a small wildlife area adjacent to the Santa Cruz Harbor, surrounded by private neighborhoods. The serene isolation and beauty of Arana Gulch is threatened by the idiotic installation of two miles of eight foot wide paved trails and a suspension bridge over Hagemann Gulch. Check out the Friends of Arana Gulch website for more information:
http://members.cruzio.com/~arana/

Los Gatos Creek Watershed - The San Jose Water Company, contracting with Big Creek Lumber, has submitted proposals to log more than 1,000 watershed acres of redwoods above the Lexington Reservoir. If approved, the “NTMP” (Non-Industrial Timber Management Program) they are attempting to obtain would allow them to “harvest” the area every 15 years, “in perpetuity”. Erosion and sedimentation from these logging operations in to streams would cause many long-term environmental consequences. Many local residents are up in arms and organizing against the logging plan. A radical challenge to this assault on the forest is needed. Learn more at
http://www.mountainresource.org/

“We are not gardeners, we are campesinos.”

The plants cry out. The Farmers were unable to retrieve the seeds that indegenous migrants had brought to L.A. from all over Mesoamerica. Amid the largest urban community farm in the nation, the crops are yanked out. Others are stepped upon, thrashed, crushed and lifeless. If you pause, you can still hear the screams. Yet, not all the plants are down. They continue to plea. They stand here as witnesses.

The Western mind is seemingly incapable of understanding the significance of the relationship between the land and the people. In a young farmers’ words, “to say that we are gente de maiz – people of maize -- is to say that we are one: the people, the land and the maize (chile, frijol & nopal, too) are all one.” The perpetrators of the June 13 evictions were the usual suspects and the weapons were the same ones used whether it is in Atenco, Mexico, Oaxaca, Chiapas or San Salvador: bulldozers, riot sticks, developers and politicians. The violence is not simply physical, it is a spiritual violence. It is undeniably an attack on the people of the farm– most of whom are of Mexican/Central American origin. Yet it is also a deeply rooted civilizational violence against the maize, the nopal and the chile... against hundreds of yerbas and crops.

The story of South Central Farm is nothing new. Capitalism destroys alternatives. And everywhere you look, we are losing ground to luxury apartments, cookie-cutter sprawl, new six-lane freeways, Wal-Marts and golf courses. Amerika is founded upon the bloodied corpses of indigenous peoples. And the process of colonization continues today. This is war. Our civilization stands on top of concrete foundations suffocating the dormant soil below. Our way of life requires an ever-accelerating process of exploitation to proceed. It is the same old story. A story we must end.

The bulldozing of South Central Farm was the bulldozing of all remaining illusions that political and economic elites can do anything other than perpetuate a system of mechanistic slaughter. If we leave it to them, their ideology will clearcut and pave over every remaining place where people and animals run free. Our hope is not in an imagined future but in our ability to act together now to change our lives. Freedom lies in revolt. Security lies in the land. In gardens and wild mountains. Cut down the fences. Water the seeds of discontent. BURN EVERY DOZER! 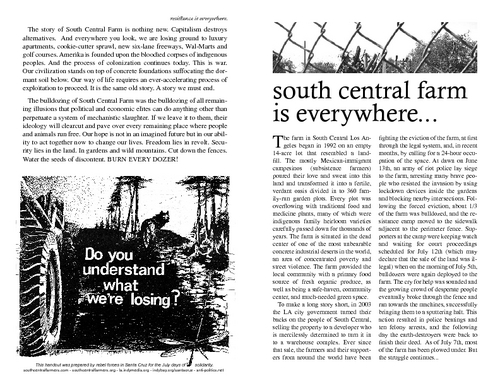 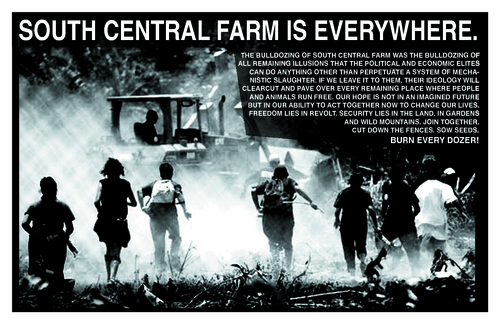 Download PDF (927.4KB)
200 copies of this poster were put up all around Santa Cruz and more will soon hit the streets!
Add Your Comments
LATEST COMMENTS ABOUT THIS ARTICLE
Listed below are the latest comments about this post.
These comments are submitted anonymously by website visitors.