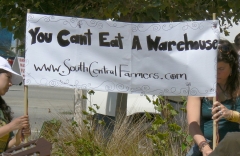 Bulldozers entered the South Central Farm in Los Angeles early on July 5th to tear out plants. This aggressive action was taken in spite of the fact that the farmers and community will go to court on July 12th to fight the legality of the sale of the land. As of 1pm, several protesters had been extracted from inside the farm, where they had been using their bodies to stop the bulldozers. Hired security guards inside the farm have been working with police to keep farmers and their supporters out of the farm. There have been multiple arrests, including at least one minor from the community who was reportedly violently thrown onto the concrete before being apprehended.

Farmers have not yet been allowed back into the farm to take out sacred religious objects, which are being bulldozed today. Other posessions, including tools, crops, and irreplacable heirloom seeds are also being destroyed. The farmers are asking supporters to come bear witness to the destruction; or, if they are unable to get to Los Angeles, to contact Jan Perry, the local city councilperson, to tell her to call off the bulldozers.

It has been announced that July 7th through 10th will be International Days of Solidarity with the South Central Farm. In an effort to "Save the South Central Farm & Support Small Farms Worldwide," people gathered in Oakland on Saturday, July 8th from 10am to 2pm, at the Grand Lake Farmers Market. Speakers and performers included Julia Butterfly Hill and Van Jones. (

Audio ) People gathered for a rally and parade in solidarity with South Central Farmers in Santa Cruz on Sunday, July 9th. (

Audio ) A new community garden has been set up in Watsonville in solidarity with the SCF.