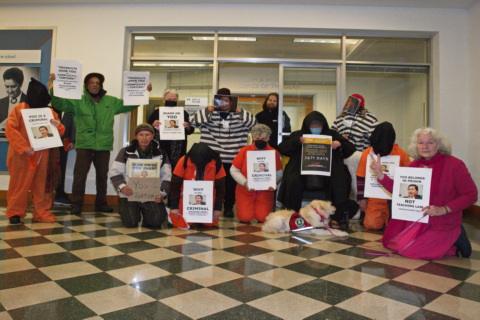 CodePink San Francisco Bay Area hosted a demonstration and press conference at U.C. Berkeley Law School on January 11, the 21st anniversary of Guantanamo Prison. They demanded that the Biden administration close Guantanamo, free the 20 men cleared for release yet still detained, and prosecute U.C. law professor John Yoo for complicity in torture. It was John Yoo, currently earning close to $500,000 a year at a taxpayer-funded university, who provided the Bush administration with the legalistic rationale to inflict torture at US prisons throughout the world.

Dean Chemerinsky, the co-directors of the International Human Rights Law Clinic at the law school, Berkeley Peace and Justice Commission members, and law school students were invited to speak at the press conference. Professor Yoo was asked to contribute to the newly established Guantanamo Survivors Fund. They did not appear, but letters were left for them at the school's office of the dean.

September 11, the “war on terror” and the criminalization of American politics (2021) |