by INDYRADIO
Washington DC protests demand Guantánamo close after 21 years of hell,
but no one wants to mention Wikileaks server is down. 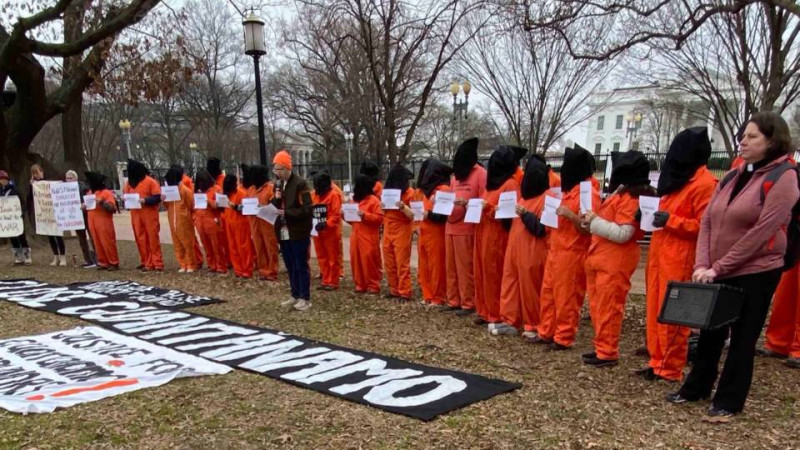 In our headlines today, we learn the main Wikileaks server has been down for at least 3 days, and we also received a report of protests on the 21st anniversary of Gitmo.

(11jan23) In Washington, D.C., protesters gathered outside the White House Wednesday to call on President Biden to close the prison at the U.S. naval base in Guantánamo Bay, Cuba. Demonstrators wore orange jumpsuits and black hoods over their heads, marking the 21st anniversary of the reopening of the notorious prison to house hundreds of Muslim men and boys who were captured overseas and handed over to the U.S. Thirty-five men remain imprisoned at Guantánamo today.

The protest was organized by the CENTER FOR CONSTITUTIONAL RIGHTS

In an open letter to President Biden, the ACLU, the Center for Constitutional Rights and over 150 other groups wrote, “The Guantánamo detention facility was designed specifically to evade legal constraints, and Bush administration officials incubated torture there. … Guantánamo continues to cause escalating and profound damage to the aging and increasingly ill men still detained indefinitely there, most without charge and none having received a fair trial.”

In the process of doing research, we wondered, were we the only ones actually trying to use Wikileaks?

No One Wants to Mention Wikileaks Server is Down

INDYRADIO (12jan23) At about the same time John Young of cryptome.org got permanently suspended from Twitter, we were doing some research and could not access any files from wikileaks.org

Of course, the site looks completely normal, unless you actually try to use it. We would have to explain "reverse proxies", in order to further discuss this, but the bottom line is simple: only the menus, layouts, and a few files are available at wikileaks.org. None of their releases are available.

John Young did quickly send a link to the diplomatic cables which he's shared via Cryptome, and we're moving them to an overseas server. full story at https://indyradio.net/?q=node/125

Although wikileaks.org looks normal, none of their files are available. John Young of Cryptome got use the cables we needed.
END_OF_DOCUMENT_TOKEN_TO_BE_REPLACED
Add Your Comments
Support Independent Media
We are 100% volunteer and depend on your participation to sustain our efforts!