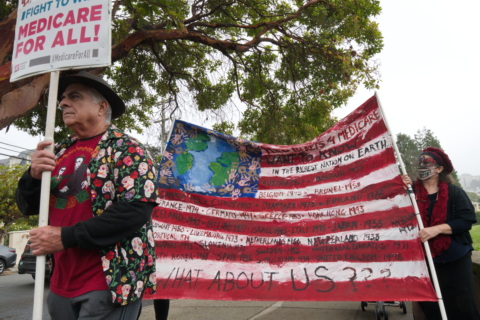 On October 30, the Day of the Dead, protesters gathered at San Francisco's Alta Plaza Park and marched to Speaker Nancy Pelosi's house, a few blocks away. Signs declared health care to be a human right and demanded Medicare for All. One, carried by "Red Berets" was an American flag marked with the year other countries instituted national health care on the stripes. "What About Us???" was written on the bottom line.

In front of Speaker Pelosi's elegant house, speakers blasted Pelosi's refusal to work for Medicare for All. Doctor Ana Malinow noted that Pelosi had indeed been trick or treating this Halloween season, the trick being the lack of health care for all and the treat being the massive giveaways to her supporters in corporate America. Vara Ramakrishnan spoke of how fascists always start by attacking the women because of their power, as is happening in Texas. Pointing an accusing finger at the speaker's house, she said that Pelosi had had the necessary votes for Medicare for All during the Obama years, but buckled to her supporters in the healthcare and insurance industries.

Day of the Dead Protest in Front of Nancy Pelosi's House |

A monthly "People's Assembly" is scheduled for November 5 at Pelosi's home:

A Parable About Speaker Nancy Pelosi |

War Is Killing the Planet/ International Day of Peace |

Is Nancy Pelosi Addicted -- to War? |