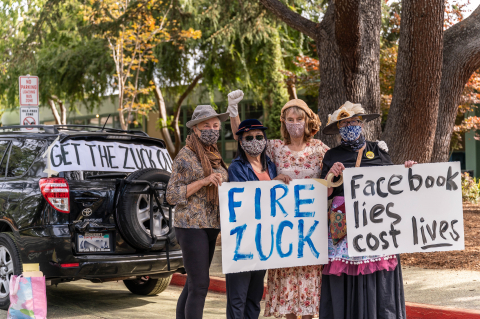 On October 17, a caravan of 20 autos parked in front of Mark Zuckerberg's Palo Alto home so protesters could honk loudly and deliver a pink slip to the Facebook CEO while chanting, "Mark, You’re Fired!" Protesters taped signs on their vehicles that called for Zuckerberg to be fired as CEO and slogans including "Facebook Lies Cost Lives."

Tracy Rosenberg of Media Alliance spoke through a megaphone to a gathering of activists, media, and curious neighbors. “One person — especially someone who has such poor judgement — should not have sole power to decide what social media content will reach billions of people. Facebook needs new leadership that prioritizes the safety and well-being of its users and the global public,” she announced. The protest came on the tail of whistleblower Frances Haugen’s testimony before the Senate Commerce Committee that the social media giant knew of its role in spreading disinformation. Haugen, a former Facebook employee, told senators the company's products "harm children, stoke division, and weaken our democracy," and that "congressional action is needed."

Critics Say Facebook Must be Investigated, Audited, Regulated, and Stopped