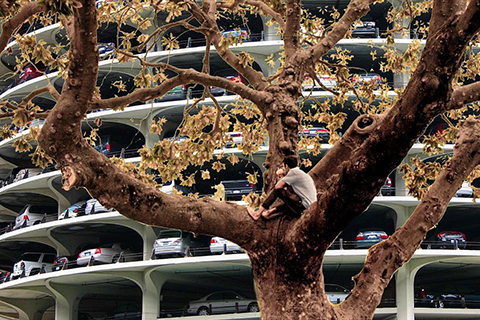 Erica Aitken of Reimagine Santa Cruz writes: The next City Council elections will decide the future of Santa Cruz. Do we open our doors to Silicon Valley with luxury rentals and our very own Santana Row? Or do we take control and build beautiful affordable housing for those who work and would like to live here? If we ask ourselves this question, it is because we have recently been the victims of a particularly galling breach of trust from our current City Councilmembers who voted 4 – 2 to replace our current library with a multi-purpose, six-story parking garage flanked by a new library, right where our farmer’s market stands.

The advocates of this project used Measure S, passed in 2016, to morph what was a mandate to upgrade and fix our libraries, into a monstrous block of concrete that would never have been approved by the voters. Even though the Nelson/Nygaard study advised against the garage, the City Council voted for it, ignoring the advice of the study they themselves had commissioned. And we don’t need additional parking spaces. Downtown parking is not only underused but we, as environmentally concerned citizens, want to reduce our dependence on cars.

There are Many Reasons to Oppose the Library/Garage/Housing Project in Downtown Santa Cruz | Real Estate PAC Backs Watkins, Brunner and Kalantari-Johnson for Santa Cruz City Council |