by Erica Aitken (reImagineSantaCruz [at] gmail.com)
The Santa Cruz City Council, paired with City Manager Martin Bernal, are passing construction projects that nobody needs and under false pretenses. How we vote in November will determine the future of our town 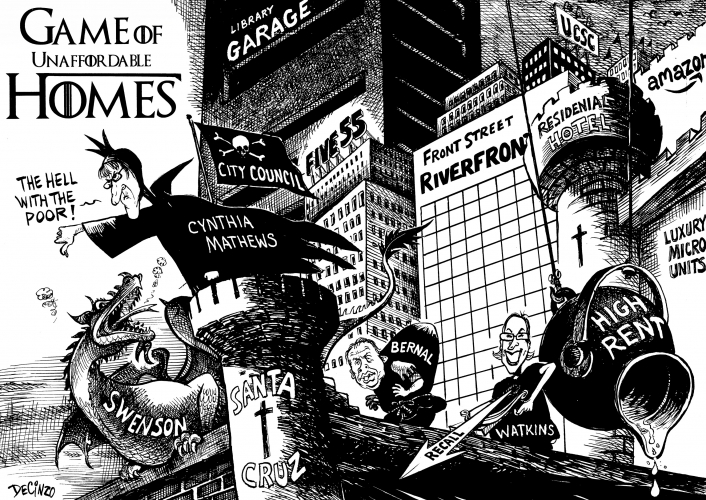 original image (3000x2124)
The next City Council elections will decide the future of Santa Cruz. Do we open our doors to Silicon Valley with luxury rentals and our very own Santana Row? Or do we take control and build beautiful affordable housing for those who work and would like to live here? If we ask ourselves this question, it is because we have recently been the victims of a particularly galling breach of trust from our current City Councilmembers who voted 4 – 2 to replace our current library with a multi-purpose, six-story parking garage flanked by a new library, right where our farmer’s market stands.

The advocates of this project used Measure S, passed in 2016, to morph what was a mandate to upgrade and fix our libraries, into a monstrous block of concrete that would never have been approved by the voters. Even though the Nelson/Nygaard study advised against the garage, the City Council voted for it, ignoring the advice of the study they themselves had commissioned.
And we don’t need additional parking spaces. Downtown parking is not only underused but we, as environmentally concerned citizens, want to reduce our dependence on cars.

This project should never have been approved without our support and knowledge. In fact, when we were finally allowed to voice our opinion, on the day of the vote, a large majority voiced opposition to the project, to such an extent that Councilmember Sandy Brown reversed her previous decision and voted against the project while Mayor Cummings and Councilmembers Watkins, Meyers and Golder voted in favor.

This parking/library project is a litmus test. It tests our confidence in the integrity of our councilmembers. We are at a crossroads, having to choose between extensive high end development, high rises, luxury buildings for the wealthy, becoming a beachfront satellite for Silicon Valley. Or, we develop our city for the benefit of existing residents, with affordable housing for all incomes, with common social spaces like the farmers market, and safer roads for cyclists and pedestrians. These are our two choices and who we elect to City Council in November will seal our future.

How to differentiate between candidates is a challenge. After all, they say the same thing. They are for affordable housing, for fixing climate change, for economic recovery and racial equality.
They might as well say that they are for world peace and the end of hunger, catch phrases that present the bland and positive image of most candidates. Traditionally, we are guided by who endorses them, choosing the candidates that our favorite organizations recommend.

Not this year. This year, I won’t let anyone make my decision for me. Because, no matter where we stand on any given issue, the one we all agree on is the need to be able to count on an honest, transparent City Council, where there aren’t secret deals being made, a Council who places us above business and who listens when we talk.

Can you trust your City Council today?

There are four seats to fill next November. Of all of the questions put in front of the candidates, which they all answer in a similar way, only one stands out: Do they approve of the library/parking garage project? Their position on this issue tells me what role they are ready to play as city councilmembers, and how I should vote for a transparent and honest City Council. I will vote for the only four who oppose the project and who will fight it when they are elected. These are incumbent Sandy Brown, and Kayla Kumar, Kelsey Hill and Alicia Kuhl. The others are in favor of the project and do not question how it was passed.

Let City Council know that builders and developers with their vision of a shiny Silicon Valley extension are not their priority. We are.

END_OF_DOCUMENT_TOKEN_TO_BE_REPLACED
Add Your Comments
Support Independent Media
We are 100% volunteer and depend on your participation to sustain our efforts!