by Santa Cruz News
Rick Longinotti of the Campaign for Sustainable Transportation has written a rebuttal to former Mayor of Santa Cruz Don Lane's blog post in support of the proposed six-story library/garage/housing project. Read Longinotti's full response below. 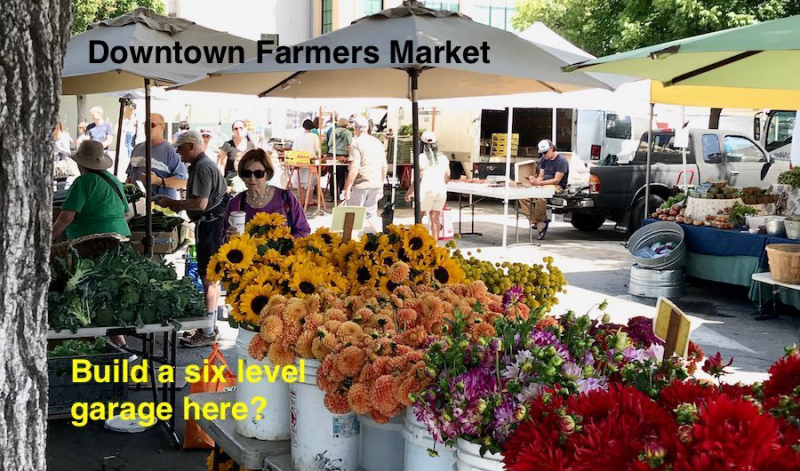 There are many reasons to oppose the library/garage/housing project.

*A city-owned lot the size of the Farmers Market lot should fit over 200 units of affordable housing, not a mere 50. The space planned for parking 400 cars would crowd out space for affordable housing. (To give an idea of the space required, the Soquel/Front St. garage contains 400 parking spaces).

* The sad irony is that the Downtown does not need 400 new parking spaces, according to a consensus of consultants who advised the City on parking. [See: https://campaignforsustainabletransportation.org/better-solutions/]

Janis Rhodes (J.R. Parking Associates) told the City that new parking garages will never pay for themselves. The only way this garage would be financially viable is for it to be subsidized with revenue from other parking garages and meters Downtown. Even this strategy is no longer viable, since the City’s financing model did not include the prospect of an economic recession. According to the City’s consultant, Economic and Planning Systems, "It should be noted, however, that the model does not evaluate a worst-case scenario (for parking revenues) where a major recession occurs or a technological change (and pricing) substantially reduces parking demand."

Patrick Siegman, when at Nelson\Nygaard, modeled future parking demand and concluded that a new garage was not needed. He is the consultant whose work the City staff misrepresented in presentations to the Downtown Commission and City Council. See my article An Honest Consultant [See: https://campaignforsustainabletransportation.org/let-the-voters-decide/an-honest-consultant/]

UCSC Professor and parking researcher Adam Millard-Ball advised the City Council that it would be cheaper to pay working commuters not to park Downtown than to build a new garage.

City staff have failed to bring the completed Nelson\Nygaard Downtown Parking Strategic Plan to the City Council. The Strategic Plan does not recommend a garage. It states, "The most fiscally prudent approach to accommodating additional demand: Modernize parking management” [See: https://campaignforsustainabletransportation.org/better-solutions/]

* It’s not accurate that spending on the garage would not impact the City’s General Fund. The City is legally able to put parking revenue into the General Fund. This was confirmed by the City Attorney At this time of fiscal crisis, building a garage would come at the expense of City workers and services.

* If/when we see economic recovery Downtown, parking revenue saved from not building a garage could be used to leverage state and federal funds for affordable housing. City staff estimate the debt on the garage as costing $2.9 million per year—for 30 years. Compare that potential resource to the $3 million in the City’s Housing Trust Fund.

* It is not accurate that future affordable housing projects need a new garage in order to avoid having to build parking on site. There are approximately 1500 empty parking spaces in City garages overnight that can accommodate Downtown residents with a parking permit. We don’t need another 400 spaces. [See: https://campaignforsustainabletransportation.org/using-parking-revenue-to-support-the-library-affordable-housing/]

* Construction with concrete results in large emissions of carbon dioxide. If the cement industry were a country, it would be the third largest emitter in the world after China and the USA.

* The need to pay a 30 year debt on the garage means the City will need more people to drive Downtown and pay for parking. The City program of METRO bus passes and JUMP Bike credit for all workers Downtown could be cut back or eliminated. The universal bus pass program was approved by a narrow 4-3 majority of the Council in 2019, with the Council members who support a garage voting no.

* Spending City revenue on a garage instead of affordable housing for the Downtown workforce misses the opportunity to for those workers to be able to walk to work.

* Locating a parking garage at that site draws traffic to the Downtown core, diminishing walk-ability. The driveways and dead space of a parking structure discourage walking.

* Public non-commercial common space is key to the vitality of any city. Moving the Farmers Market to Front St. is exactly what the Downtown Plan said not to do: "Open spaces within downtown Santa Cruz should have value and meaning; they should be carefully located where people want to be and in locations that take advantage of the unique resources, heritage, and traditions of the community. They should not be contrived or created from 'leftover’ space”

* When the Downtown Parking District is short on revenue to pay the debt service, the City will have to raise parking rates or fees on businesses. Downtown businesses aren’t fond of either strategy.


In closing, I suggest that the City has not learned from its experience with promoting the desalination plant. Why does a group of citizens need to resort to a ballot initiative in order to be able to have a seat at the table of dialogue that resulted in unanimous approval of alternatives to desalination? Why doesn’t the City engage in a process with citizens who oppose the parking structure? Surely a “public process” in which the Nelson\Nygaard report costing the City $100,000 is suppressed, doesn’t qualify as a democratic process.

Campaign for Sustainable Transportation
https://campaignforsustainabletransportation.org/
Add Your Comments
Support Independent Media
We are 100% volunteer and depend on your participation to sustain our efforts!