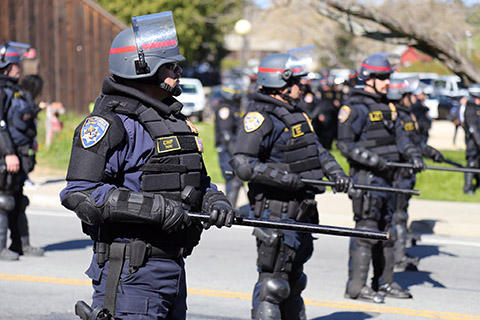 In an interview originally broadcast August 6 on KZSC, a radio station broadcasting from UC Santa Cruz, John Malkin spoke with Vilashini Cooppan, Camilla Hawthorne, and T. J. Demos, three professors at UCSC who co-signed or supported a letter to the Chancellor calling for an end to police and ICE presence on campus. "Our country is witnessing the brutal effects of the entrenched racist history of policing, a history that goes back to 'slave patrols' and 'Indian patrols' and that continues to disproportionately target African Americans, Native Americans, Latinx Americans, and Asian Americans. Our own campus recently witnessed a level of police presence and violence so unprecedented that it swiftly garnered local, state, national, and UC-wide condemnation."

The letter to the Chancellor continues, "I write to denounce the force used against protesting students and the employment—at a cost of $300,000.00 per day—of a police force brought in from neighboring cities and counties, dressed in riot gear, and equipped with military surveillance technology. This is a university campus, and one with a celebrated and valued tradition of student protest. How can we urge our students to 'question authority' when that authority stands deaf before multiple calls to renounce policies that harm, harass, ban, dismiss, and otherwise financially and academically disadvantage its very own students, including a disproportionate number of students of color?"

Read More and Listen to the Interview

Related Features: UC System Wide Day of Action in Support of Fired UCSC Workers | For Wildcat Strikers at UCSC, There's No Turning Back