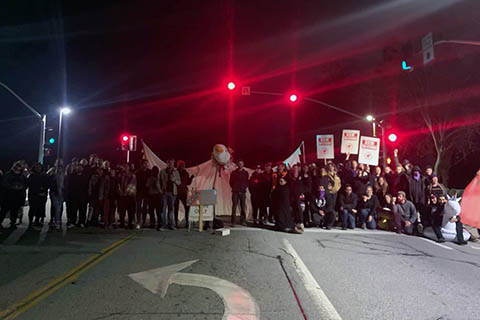 On March 5, graduate student workers at UC Santa Cruz and their undergraduate allies participated in a UC system wide day of action in solidarity with their fellow workers whom university administration fired. Large demonstrations took place simultaneously at other UC campuses, including UC Berkeley, UC Santa Barbara, UC Irvine and UC Riverside. At UCSC, classes were cancelled as students shut down both entrances to campus starting at 5:30am. At UC San Diego, graduate students decided to initiate a grading strike on Monday, March 9.

Striking graduate students explain, "The administration’s response has been to minimize the significance of the crisis from the beginning, to bemoan the interruptions caused by the strike, and to deflect blame for these consequences onto the strikers. This is why business cannot carry on as usual, and why students, faculty, and workers across University of California campuses statewide are taking action today. The strike began because there was a crisis that demanded to be acknowledged, that had been swept under the rug for too long. Every administrative response since, from indifference to tear gas to termination letters, has only further illustrated the depth and breadth of the crisis perpetuated every day by this university system. Classes are cancelled today because things must change if anything is to carry on at all."

See Also: A Statement by The People's Coalition Post-Firing of the Graduate Students |

This Is America: Interview with Grad Student Workers from UC Santa Cruz and UC San Diego

Related Feature: For Wildcat Strikers at UCSC, There's No Turning Back