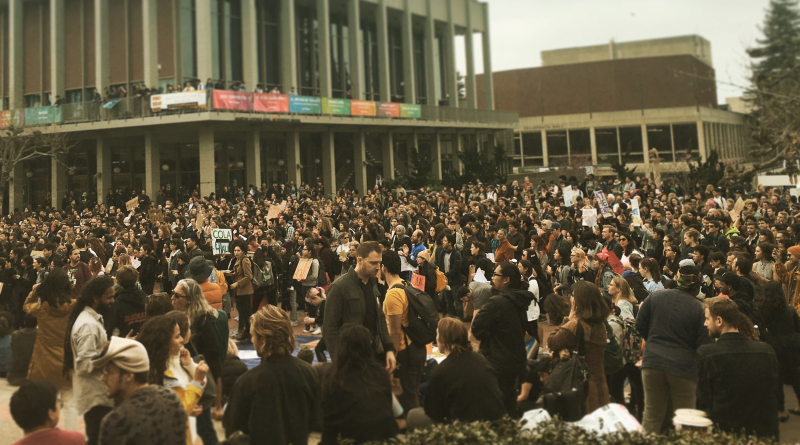 On Thursday, March 5th, UC Berkeley graduate student workers, undergraduate students and faculty joined together for a full day of work stoppage. The strike was organized by CAL COLA, an autonomous group of graduate workers and undergraduate students that began to organize in December 2019 in solidarity with the striking graduate workers at UC Santa Cruz. The Day of Action was part of the UC-wide Blackout Day in solidarity with Santa Cruz strikers who were fired last week, and organized independently of UAW Local 2865.

The day of coordinated work stoppage occurred as University of California officials have drastically escalated their efforts to break the graduate student wildcat strike at UC Santa Cruz. Santa Cruz graduate workers are demanding a Cost-of-Living Adjustment (COLA) of $1,412 per month to bring them out of rent burden in​ ​one of the country’s most expensive real estate markets​, and have been on a grading strike since December 2019. They began a full teaching strike on February 10th, and have been picketing every weekday for more than three weeks.

On February 28th, around 80 UC Santa Cruz graduate workers were fired from their spring quarter positions for their participation in the strike. UC administration’s extremely repressive and unprecedented retaliation drew condemnations from all across the country, including the American Association of University Professors​ (AAUP), the ​Modern Language Association (MLA) and Sen. ​Bernie Sanders​.

The day of work stoppage took place as mobilizations towards a full strike at UC Berkeley continue. The CAL COLA General Assembly (GA) on Monday called on graduate workers in all departments at UC Berkeley to organize towards a strike at the departmental level. The GA on Monday decided that once 10 departments declare themselves to be strike-ready, a special General Assembly will be immediately called to discuss declaring a full indefinite wildcat strike at Berkeley. As of Wednesday, graduate workers in two departments, African-American Studies and Anthropology, have published ​letters declaring their readiness to join a strike​. Graduate workers in five additional departments have met and are preparing to release letters declaring strike-readiness. 340 UC Berkeley faculty have signed a “non-retaliation” statement, supporting a graduate student strike for COLA and guaranteeing that future departmental decisions about fellowship support and GSI allocations will not be affected by students’ decisions regarding strike participation.

The day of action at UC Berkeley included walkouts from all classes with a central gathering on Sproul Plaza, where various events and teach-ins took place. There was a mass mobilization on Sproul Plaza for a rally at noon.