Add an Event
Newswire
Calendar
Features
Home
Donate
From the Open-Publishing Calendar
From the Open-Publishing Newswire
Indybay Feature
Publish to Newswire
Add an Event
Related Categories: California | Santa Cruz Indymedia | Education & Student Activism | Labor & Workers
UC Santa Cruz Shutdown: Why Classes Are Cancelled
by Spread The Strike!
Thursday Mar 5th, 2020 3:47 PM
Classes are cancelled today because things must change if anything is to carry on at all.

Nearly 100 of our colleagues have been fired. 18 of our friends and supporters have been arrested, many brutalized by police. The same precarious workers that were driven to demand a COLA have been rendered even more precarious—facing further food and housing insecurity, potential loss of legal status, healthcare, and childcare subsidies. The student conduct process has been mobilized to suppress dissent and monitor political activity in relation to employment decisions. Administration has tried to drive wedges between everyone—undergrads and grads, workers and student workers, faculty and advisees, divisions and departments.

The administration’s response has been to minimize the significance of the crisis from the beginning, to bemoan the interruptions caused by the strike, and to deflect blame for these consequences onto the strikers. Their repeated calls for returning back to business as usual at all costs (modified slightly with new advisory councils, studies, “short and long term solutions”) is also their justification for refusing to acknowledge the strike directly. UCOP states unequivocally that the wildcat strike undermines the basis on which they manage the university’s labor. And they are set on stamping it out and reducing it to an aberration. The firing 10% of the TA workforce cannot pass for normal; neither should it be normalized. It is an outrageous and cruel overreach by a profit-hungry administration.

This is why business cannot carry on as usual, and why students, faculty, and workers across University of California campuses statewide are taking action today. The strike began because there was a crisis that demanded to be acknowledged, that had been swept under the rug for too long. Every administrative response since, from indifference to tear gas to termination letters, has only further illustrated the depth and breadth of the crisis perpetuated every day by this university system. Classes are cancelled today because things must change if anything is to carry on at all.

In solidarity with students, workers, faculty, and staff, 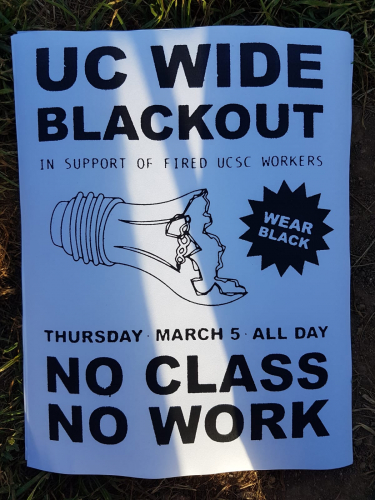 I wanted to write again with some updates from the ongoing strike.

For the 17th day, hundreds of graduate students, faculty, undergraduates, staff, lecturers and others rallied at the base of campus and for the 17th consecutive working day metro bus drivers refused to cross the picket line. Strikers marched and listened to local musical artists as part of “COLA-CHELLA” and were visited by Fred Moten who led a group discussion at the picket line, along with other teach ins and actions. So far UCSC has spent $5.1 million dollars on police rather than meet with striking graduate students; this is nearly 25% of the cost of an annual COLA for all graduate students. Administration continues to be silent after the firing of its graduate students–and so tomorrow the strike continues!

Tomorrow, Thursday March 5th, will be a special UC system wide day of action in solidarity with our colleagues and friends who were fired by university administration. When the university would rather fire its own students–students fighting for a living wage– than have a simple conversation, business as usual cannot continue. Organizers are calling for a day of no classes and no work across the system. Please ask yourself: Do you want a system of education in which a PhD is accessible to only to the wealthy and privileged? If the answer is no, we need your support and we need it now.

https://payusmoreucsc.com/
Add Your Comments
LATEST COMMENTS ABOUT THIS ARTICLE
Listed below are the latest comments about this post.
These comments are submitted anonymously by website visitors.