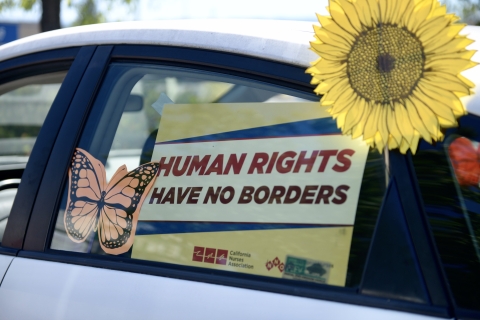 On a warm Memorial Day with California slightly relaxing its lockdown, a Code Pink caravan of decorated cars delivered an anti-war plea to the steps of Senator Diane Feinstein's Pacific Heights $10 million mansion.

Starting in Marin, the caravan, complete with its "Ghandhimobile Caboose,” crossed the Golden Gate Bridge, then wound its way past the San Francisco National Cemetery, down a section of Lombard Street and up to the Feinstein mansion. Gathering in an adjoining cul de sac, the group held a press conference and created a memorial altar for the all the war victims of nearly 20 years of wars in Afghanistan, Iraq, Yemen, Syria, Libya, Somalia and elsewhere.

Later the same afternoon in San Jose, another peace caravan focused on the demand for human rights to health, housing, education, a living wage and all the components of a dignified life. Demonstrators gathered at a major San Jose intersection that has come to be known as Peace Crossroads. There, they collected cash donations in a bucket and attached banners and large peace symbols to about a dozen cars. From the Peace Crossroads, they took their colorful caravan through the streets of downtown San Jose. They ended their journey at the Roosevelt Community Center where they met with volunteers who provide services for a nearby homeless encampment, shared solidarity and contributed the money they collected.

Organizers of both demonstrations said their goal was to counter the usual militaristic Memorial Day rhetoric and that they work so there will be no more war dead to be memorialized.