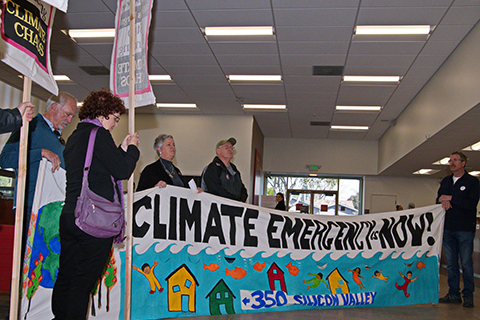 In a two-day action, demonstrators called on Big Oil’s largest lender, Wells Fargo, to halt its financing of fossil fuels and invest instead in clean energy solutions to the climate crisis. They took their protest to branches in San Jose and Mountain View.

In San Jose on February 20, about twenty demonstrators marched into the Wells Fargo branch. They quickly deployed banners and signs throughout the bank’s customer area, then sang and chanted the message that Wells Fargo’s $172 billion a year financial support of the fossil fuel industry is destroying our environment. When they tried to deliver a letter to the bank manager, employees said that person was not available, then called the police. It took about forty minutes for law enforcement to arrive, giving the protesters time to chant, sing and distribute flyers, which they passed out to bank employees and customers alike. When police arrived and issued an "official” trespass warning, demonstrators continued their protest outside.

At Mountain View branch the following day, administrators called police, who arrived in about 20 minutes. The manager on duty refused to accept a prepared letter addressed to corporate headquarters, prompting demonstrators to stage a die-in to make their point.

350 Silicon Valley recently changed its name to SV-CAN (Silicon Valley Climate Action Network). They planned and executed the coordinated dual front action; there were no arrests at either location. Organizers with the group said they plan even bigger actions in the coming months.