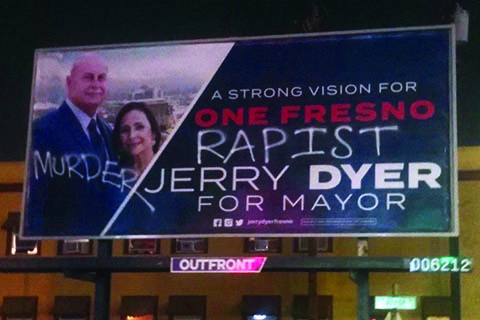 Mike Rhodes reports: My first history lesson about Fresno’s corrupt underbelly was in the late 1990s when I read Mark Arax’s book "In My Father’s Name." It is a great book about Arax’s search for the killer of his father, which dives deep into Fresno’s interesting but corrupt past.

I remember Arax writing about Fresno Police Chief John Goehring (a relative of Herman Goehring, the Nazi field marshall). Federal agents in 1917, during a raid of the Ku Klux Klan HQ in Los Angeles, found a list of seven Fresno police officers who were KKK members. The mayor had the seven fired, but the Civil Service Board overturned the decision officially keeping racism alive and well in Fresno.

Arax, writing for the Los Angeles Times, quoted Larry Miller, a retired federal agent who busted numerous Fresno bookies with connections to the Fresno Police Department (FPD) in the 1960s. “It was a rotten town with a rotten police force and the citizens didn’t mind. Their indifference was practically suffocating.”

Now former FPD Chief Jerry Dyer wants to be the next mayor of Fresno. If elected, he will continue the good old boy connection with a corrupt past and bring that culture to the highest elected position in the city.

Justice for Lonnie Graham and all Victims of Police Brutality

Related Feature: Isiah Murrietta-Golding Shot in the Back of the Head by Fresno Police