Add an Event
Newswire
Calendar
Features
Home
Donate
From the Open-Publishing Calendar
From the Open-Publishing Newswire
Indybay Feature
Publish to Newswire
Add an Event
Related Categories: Central Valley | Police State & Prisons
Corruption in the Fresno Police Department Runs Deep
by Mike Rhodes
Tuesday Feb 25th, 2020 2:11 PM
This article reveals the dark underbelly of corruption in Fresno, with a focus on the Police Department. Photo below: Jerry Dyer on the left, holding noose. Now he wants to be the mayor of Fresno. 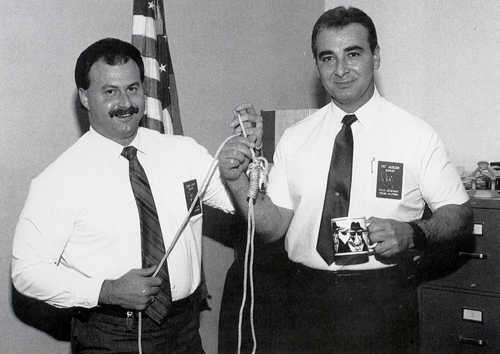 In January, this newspaper announced that there would be an article about the deep corruption within the Fresno Police Department that goes back for generations. “The Long History of Police Corruption in Fresno” by James Mendez was the front-page story in February. At least one reader has recommended Mendez for a Pulitzer Prize (see Joel Eis’s letter to the editor) for that article.

My first history lesson about Fresno’s corrupt underbelly was in the late 1990s when I read Mark Arax’s book In My Father’s Name. It is a great book (one of my all-time favorites) about Arax’s search for the killer of his father, which dives deep into Fresno’s interesting but corrupt past.

I remember Arax writing about Fresno Police Chief John Goehring (a relative of Herman Goehring, the Nazi field marshall). Federal agents in 1917, during a raid of the Ku Klux Klan HQ in Los Angeles, found a list of seven Fresno police officers who were KKK members. The mayor had the seven fired, but the Civil Service Board overturned the decision officially keeping racism alive and well in Fresno.

During Prohibition, Fresno County was known as one of the wettest counties in the nation, leading to a federal investigation that uncovered a massive operation that involved police taking bribes. Arax wrote that the “previous chief and a captain had bagged enough cash to retire on vineyards north of town.”

In the 1950s, the police chief was Hank Morton, who perfected the art of corruption. Morton would set up local politicians with prostitutes at the Hacienda (bar and motel), film the tryst and use that to keep them under his control. Morton also took control of the city’s prostitution business, and when he retired he married the woman who ran one of the biggest brothels in town.

In 1964, Morton’s second decade as chief, Henry Hunter, the new city manager, fired him. Apparently, Chief Morton had been taking confiscated guns and giving them as gifts to his friends. He was also fired for his involvement in prostitution, and there was a charge of his misusing public funds. But “Morton’s firing would prove to be a monstrous miscalculation by a city manager who had been in Fresno barely a year,” according to Arax.

After Morton was fired, all his friends threw a big dinner for him at a church. Attending were more than a thousand people including the mayor, City Council members, business leaders, the sheriff and prominent farmers. Even Governor Edmund Brown sent a telegram gushing praise.

“After the dinner, Morton was reinstated, given his job back, full salary and an apology,” Arax said. “The city manager was fired and sent packing.”

Arax, writing for the Los Angeles Times, quoted Larry Miller, a retired federal agent who busted numerous Fresno bookies with connections to the Fresno Police Department (FPD) in the 1960s. “It was a rotten town with a rotten police force and the citizens didn’t mind. Their indifference was practically suffocating.”

After Morton, we had Chief Ed Winchester, who is famous for several scandals that led to his resignation in 2001, including the disappearance of 11 pounds of cocaine and $200,000 in cash from the evidence room.

Jerry Dyer grew up when Morton ran the city and joined the FPD in 1979 while Winchester was chief. Dyer became the public information officer in 1995 and with the exposure he got in the media became the new police chief in 2001. See the article in last month’s issue of the Community Alliance to see how that went.

According to Arax, the corruption in the FPD continued through the 1980s and early 1990s. This was a time when Dyer and the people close to him say he was modeling less-than-ideal behavior.

Arax wrote: “State agents trying to bust a large steroid and cocaine ring ran across police officers as customers. One high ranking narcotics cop, a steroid user himself, kept tipping off the ring to the movement of the state investigators. The DA’s office and police department’s Internal Affairs conducted sloppy probes that ended without charges or disciplinary action.”

Now Dyer wants to be the next mayor of Fresno. If elected, he will continue the good old boy connection with a corrupt past and bring that culture to the highest elected position in this city. We will know on March 3 if Fresno is ready to break with its past or embrace a future that promises social and economic justice.

Mike Rhodes is on the editorial board of the Community Alliance (an alternative/independent newspaper in Fresno), a member of the Central Valley Progressive PAC and author of the book Dispatches from the War Zone, about homelessness in Fresno. Contact him at mikerhodes [at] comcast.net.
§Hank Morton
by Mike Rhodes Tuesday Feb 25th, 2020 2:11 PM 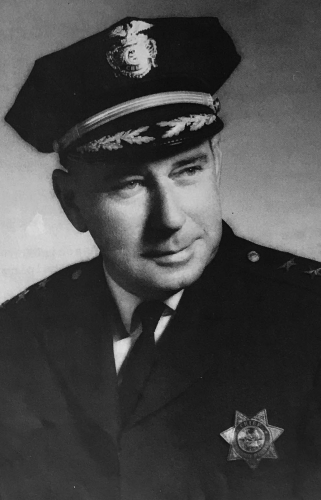 original image (1037x1612)
In the 1950s, the police chief was Hank Morton, who perfected the art of corruption. Morton would set up local politicians with prostitutes at the Hacienda (bar and motel), film the tryst and use that to keep them under his control. Morton also took control of the city’s prostitution business, and when he retired he married the woman who ran one of the biggest brothels in town.
Add Your Comments
LATEST COMMENTS ABOUT THIS ARTICLE
Listed below are the latest comments about this post.
These comments are submitted anonymously by website visitors.