Add an Event
Newswire
Calendar
Features
Home
Donate
From the Open-Publishing Calendar
From the Open-Publishing Newswire
Indybay Feature
Publish to Newswire
Add an Event
Related Categories: Central Valley | Police State & Prisons
Justice for Lonnie Graham and all Victims of Police Brutality
by Mike Rhodes (editor [at] fresnoalliance.com)
Saturday Oct 10th, 2009 5:28 PM
On September 23, two Fresno police officers shot and killed Lonnie Graham. He was unarmed. Police chief Jerry Dyer said his officers feared for their lives when Graham emerged from a house with a cell phone in his hand. Yesterday (October 9, 2009), a protest was held in downtown Fresno. 2:52 minute audio below.

Listen now:
Copy the code below to embed this audio into a web page:
Download Audio (2.6MB) | Embed Audio
Press Release sent out to announce this event:

“It is our duty to fight for our freedom…We’ve got nothing to lose but our chains.” – Assata Shakur

**MARCH AND VIGIL AGAINST POLICE BRUTALITY AND HARASSMENT**

WHAT: Amidst the recent murder of Lonnie Graham on September 23rd, 2009, family and friends of
Lonnie, as well as other community members, will march from the Fresno County Jail to the Fresno
Police Department (FPD) (both located downtown) in protest of/response to the reoccurring abuse
of power and harassment by the Fresno Police Department. The march will be followed by a vigil in
front of the Fresno Police Department to support the family and friends of Lonnie and all victims of
police brutality and harassment.
WHY: Lonnie Graham was unarmed at the time of his murder. He deserved to have his rights upheld
and a trial, not to be shot down like a dog. Officers ought to be trained to tell the difference between
a cell phone and a gun, and must be held accountable when they choose to shoot first, figure out the
details later. We are paying Officers Alphonso Castillo and Josh Bowling for a vacation after
murdering an unarmed man!

Since the murder, Lonnie’s family has been harassed by FPD, at the time of the shooting, at a car wash
fundraiser for funeral expenses, and at the wake. This is inexcusable and it is not the first time that
the FPD has used such irresponsible scare tactics to settle personal vendettas and be ‘tough on
crime’.

Fresno has just over 23 percent of residents with income below the poverty level nearly double times
that of the states average (12%); the percentage in West Fresno is 51 (The Enduring Challenges of
Concentrated Poverty in America, 2009). Currently Latino/a and African American students drop out
at a rate of 26‐30% compared to the district average of 23.9% (CA Department of Education 20072008).
Poverty and drop out rates are directly linked to crime.

We need to be proactive and get to the root of ‘crime’ instead of simply reacting to it. We need to ask
questions: why do people join gangs and do crimes? Is it out of want or necessity? Choice or force?

WHERE: We will meet 4pm at 1225 M St Fresno, CA (across from FRESNO COUNTY JAIL) then we
will march to 2323 Mariposa St, Fresno, CA (downtown FPD/headquarters)

WHO: The Fresno Brown Berets is a militant, grassroots, community organization formed solely for the
service, education, protection, and EMPOWERMENT of communities that have historically been and
systemically continue to be pushed to the margins of the political, social, and economical process. We
organize and empower with any person or group to not only improve ones conditions, but to raise ones
level of consciousness towards a common goal of JUSTICE on all levels and for all people.
§Trigger Happy Pigs
by Mike Rhodes Saturday Oct 10th, 2009 5:28 PM 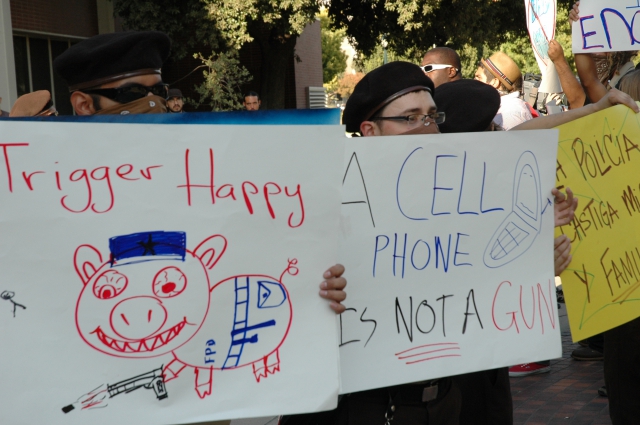 original image (3008x2000)
This part of the protest was held in front of the police HQ on the Mariposa Mall in downtown Fresno.
§Killer Cops
by Mike Rhodes Saturday Oct 10th, 2009 5:28 PM 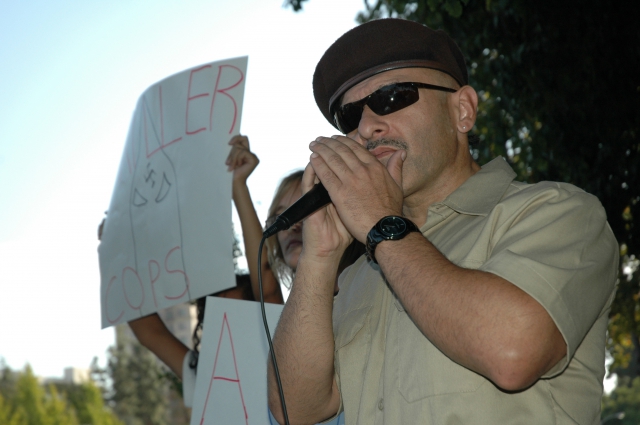 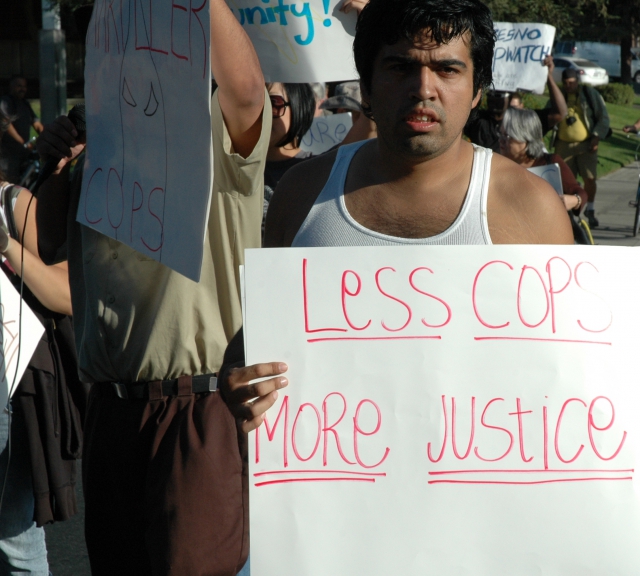 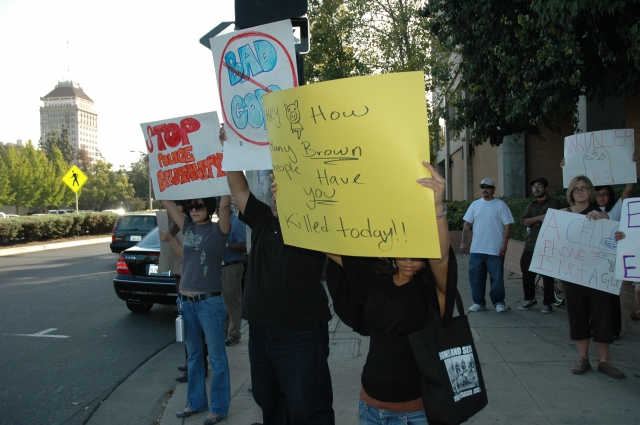 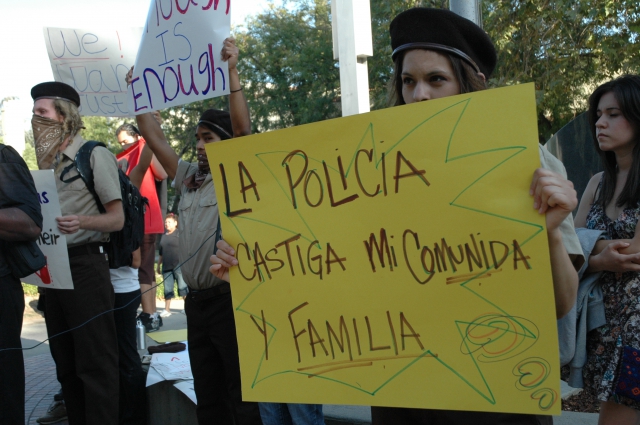 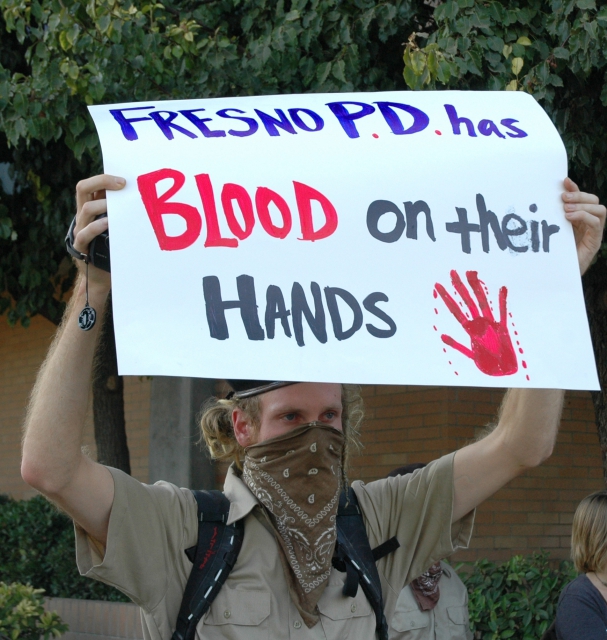 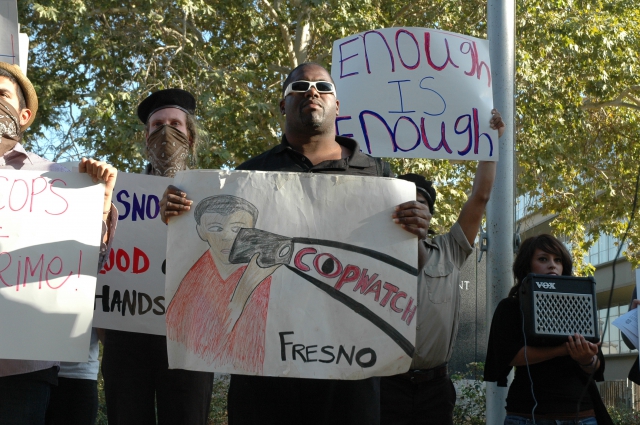 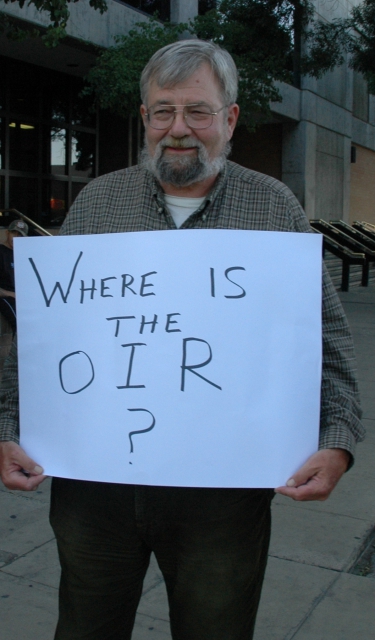 original image (1057x1802)
Bill Simon is the chairperson of the local ACLU
Add Your Comments
Support Independent Media
We are 100% volunteer and depend on your participation to sustain our efforts!