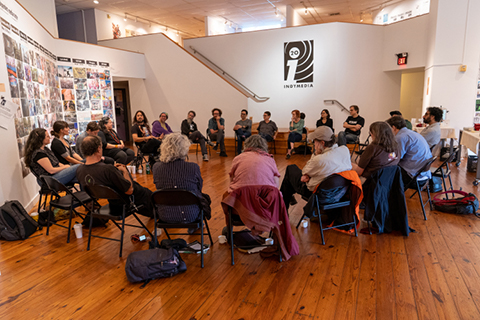 Two decades is a long time and a lot has happened in the movement for global justice since the first Independent Media Center was established in preparation for the World Trade Organization protests that began in Seattle on November 30, 1999. At that time, learning from the earlier work of other radical media pioneers, DIY media activists pooled their resources and technical skills to build out a physical media center and a website to facilitate the publishing of independent, non-corporate news reports from the streets as protests and police violence unfolded. The world stood up and took note: the WTO was shut down and the Indymedia network sprang to life.

The global IMC network exploded on the scene in cities around the world within a few years of N30, expanding to include over 150 local affiliates. It didn't come easy, though. Establishing and maintaining Independent Media Centers was always an uphill battle, beyond internal concerns of maintaining technical and human capacity. "Make media, make trouble" is the rallying cry behind the anarchist project, and authorities have taken the threat posed to their vested interests seriously. Volunteers have been arrested, jailed, maimed, and even killed by state forces. Web servers have been seized, IMCs have been ordered closed by law. Corporations have filed lawsuits and worked to ban IMCs.

Read More: Curriculum to commemorate 20th anniversary of Indymedia / Seattle 1999 WTO protests | On the origin and context of the indymedia network by Rabble (2006) | Interview with Jeff Perlman, Director of the Independent Media Center in Seattle (2000) | Indymedia and Indybay History | Click "► IMC Network" in the blue bar at the bottom of every Indybay page for links to CMIs/IMCs from around the world