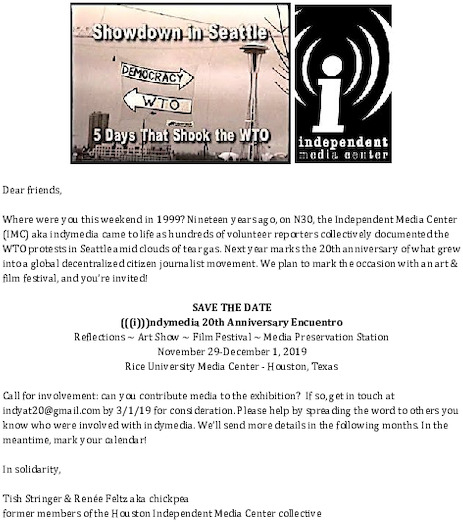 Import event into your personal calendar
Date:
Friday, November 29, 2019
Time:
12:00 AM - 12:00 AM
Event Type:
Conference
Organizer/Author:
Tish Stringer & Renée Feltz aka chickpea
Email:
indyat20 [at] dangerousmedia.org
Location Details:
Rice University Media Center
Houston, Texas
Where were you this weekend in 1999? Nineteen years ago, on N30, the Independent Media Center (IMC) aka indymedia came to life as hundreds of volunteer reporters collectively documented the WTO protests in Seattle amid clouds of tear gas. Next year marks the 20th anniversary of what grew into a global decentralized citizen journalist movement. We plan to mark the occasion with an art & film festival, and you’re invited!

Call for involvement: can you contribute media to the exhibition? If so, get in touch at indyat20 [at] dangerousmedia.org by 3/1/19 for consideration. Please help by spreading the word to others you know who were involved with indymedia. We’ll send more details in the following months. In the meantime, mark your calendar! 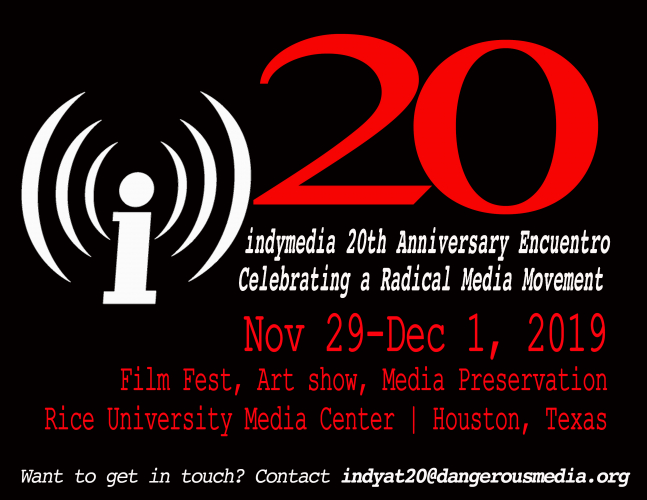 original image (3300x2550)
Add Your Comments
Support Independent Media
We are 100% volunteer and depend on your participation to sustain our efforts!