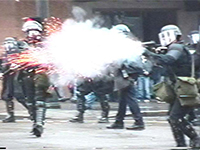 The Indymedia (Independent Media Center) project started in late November of 1999, to allow participants in the anti-globalization movement to report on the protests against the WTO meeting that took place in Seattle, Washington, and to act as an alternative media source. By 2002, there were 89 local IMCs around the world spread between 31 countries (plus the West Bank) and 6 continents. By January 2006, the Indymedia network had grown to over 150 Indymedia outlets around the world.

The San Francisco Bay Area Independent Media Center, commonly known as Indybay, started in 2000. One early Indybay project was a page exposing bad landlords. Another event that helped pull in many early Indybay volunteers was the National Association of Broadcasters (NAB) Conference that took place in September 2000 in San Francisco. Indybay soon broadened its coverage. Local labor struggles, forest activism in Northern California, and police brutality were quickly a focus of the early site.