Add an Event
Newswire
Calendar
Features
Home
Donate
From the Open-Publishing Calendar
From the Open-Publishing Newswire
Indybay Feature
Publish to Newswire
Add an Event
Related Categories: California | Media Activism & Independent Media | Police State & Prisons | Racial Justice
LA Indymedia 10-Year Anniversary: "Troublemaking: The Worst and Best of Indybay"
by dave id
Monday Nov 16th, 2009 10:18 PM
On Saturday, November 14th, 2009, Los Angeles Indymedia celebrated 10 years since the first Independent Media Center (IMC) opened its doors in Seattle to cover and support the demonstrations against the meeting of the World Trade Organization (WTO). While the entirety of 10 years of media activism can hardly be presented in an hour, Indybay discussed some of the highlights of stories covered, technologies developed, legal threats battled and lessons learned over the past 9+ years of Indymedia in the Bay Area and Northern California. Attached below are the accompanying 35-page PDF slideshow and full audio. 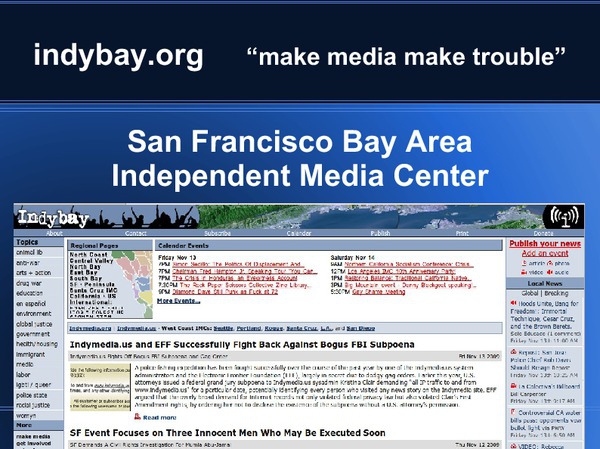 Download PDF (3.1MB)
Also discussed was one of the biggest local stories covered by Indybay this year: the movement for justice for Oscar Grant, who was killed by police officer Johannes Mehserle on Jan. 1, 2009, and the potential for coverage coordination when Mehserle's trial is moved to Southern California.

- One of the initial features was “The Housing Project” covering housing crisis/gentrification (AKA dot-com boom, AKA dot-com bubble)
- Users were initially allowed to create account and rate articles.

- We Interrupt This Empire

- Josh Wolf ordered to turn over video in Grand Jury investigation of July 2005 anti-G8 protest.
- Jailed for 226 days, a record for a journalist refusing to divulge source materials.
- Photo by Bill Carpenter

- Can journalists refuse to comply with grand jury subpoenas?
- Definition of journalist (professional vs. participatory)
- Does Fed. Govt. have standing?

Rebellions on Jan. 7th...
…and Jan 14th...
- ...Lead to first ever murder charge against California cop for on-duty shooting.

http://la.indymedia.org
Add Your Comments
Support Independent Media
We are 100% volunteer and depend on your participation to sustain our efforts!