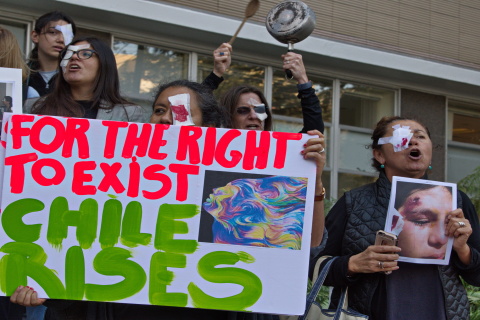 High school students began to protest a fare hike on the subway system of Santiago by jumping turnstiles en masse on October 6. Protests against economic inequality quickly spread across Chile and escalated to huge public demonstrations and work strikes. After more than 40 years of living under a political constitution that was created under and by a dictatorship and a neoliberal economic model that has privatized the entire country, the people said No Mas Abusos (No More Abuse). Chilean president Sebastián Piñera directed police and military to use violence against protesters. Thousands have been arrested and injured. The Chilean military is targeting protesters' eyes and hundreds have lost their sight in one or both eyes. Actions in solidarity with the people of Chile have been held around the world, including several in San Francisco.

On October 22, an emergency protest was held in San Francisco to protest the military repression in Chile. Speakers talked about the role of the US government in the 1973 military coup that brought in the dictator Pinochet and his implementation of the capitalist policies which privatized pensions, water, transportation, education, and all public services.

On October 24, dozens of Chileans and Chilean Americans rallied at the Chilean consulate in San Francisco against the use of the military to torture and beat protesters in Chile. They also demanded an end to privatization and Milton Friedman economic policies.

On November 19, with bandaged eyes, the Do No Harm Coalition held a lunch hour protest in sympathy with the Chilean people. With songs and signs showing eye wounds, protesters demonstrated on the steps of UCSF's Medical Science building. The Do No Harm Coalition considers the actions of the Chilean authorities as constituting a medical emergency, hence the action at the major health facility.

SF Emergency Solidarity action with the people of Chile! (10/22)