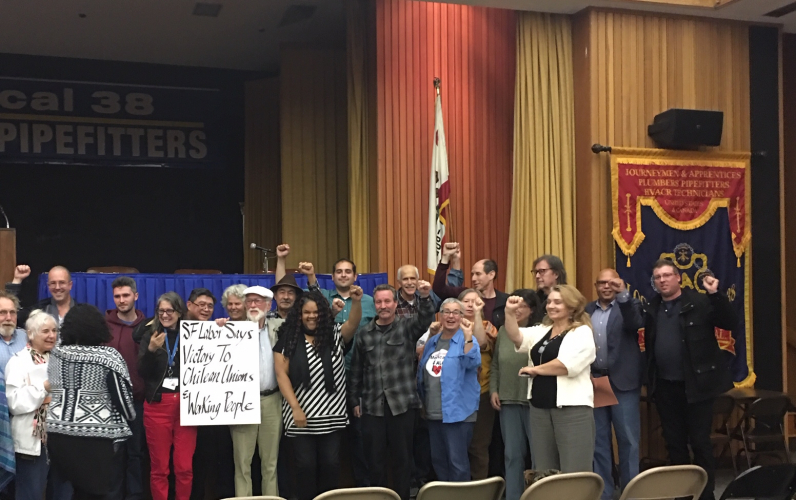 original image (1552x974)
The San Francisco Labor Council at its meeting on 10/28/19 voted a statement of solidarity with the unions and working people of Turkey and also stood in solidarity with their brothers and sisters in Chile.

Stop The Military State Of Emergency In Chile-Solidarity Protest In SF
https://youtu.be/IViF_4WsFu8

Stop The Military State Of Emergency In Chile-Solidarity Protest In SF
https://youtu.be/IViF_4WsFu8

Resolution in Support of the Rising Chilean People’s Movement for Economic Equality and Political Freedom.

Whereas, the recent mass mobilizations and protests happening in Chile during this past week started as high school students’ rebellious and brave response to a fare hike on the subway system of Santiago, Chile, where they decided to jump the turnstiles and refuse to pay the fares in order to make clear their opposition to the hike as it had a disproportionately negative impact upon more than 50% of Chileans who earn a minimum wage of 300,000 pesos per month, and upon the retirees who get only 100,000 pesos per month and are unable to pay for their medicines, many of whom are the parents and grandparents of these students, and

Whereas, the Pinera government response was to send in the Carabineros, the Chilean police force which savagely attacked the youth and even threw tear gas into the trains, trapping passengers in the toxic fumes and then escalated its response by applying the nefarious State Security Laws against the detained youth, laws which had been created by the Pinochet dictatorship to repress the opposition and which had continued to be used during these past 30 years mostly against the Mapuche people, and

Whereas, Chile’s public pension system was privatized after the dictatorship of Pinochet took power and the economic policies of privatization known as the Milton Friedman Chicago Boys School of Economics was imposed upon the entire working class of Chile by means of a bloody dictatorship which outlawed strikes, imprisoned activists and disappeared thousands of workers and privatized healthcare, education and even the most essential ingredient for life, WATER, and

Whereas, the rampant corruption that exists within the elite owners of corporations which have been caught in price-fixing schemes in the pharmaceutical industry, in the poultry, in paper products, as well as high-stakes tax evasion have only earned them wrist-slapping sentences of “Ethics classes” while the disproportionate use of force and criminalization used against the youth who were protesting was the straw that broke the camel’s back and motivated the adults to stand up for their youth and for their future and demand a Chile where they can live in dignity, and

Whereas, there have been video reports via social media showing police and armed forces shooting incendiary objects towards rooftops of supermarkets, creating barricades and setting fires and these counterinsurgency scare tactics are used by military regimes to scare the population into demanding protection by the military from alleged terrorist forces while it is clear that people are gathering in peaceful defiance of the military and police presence in the major plazas and intersections to express their discontent with the government, and with the political system which allows this inequality to continue, and

Whereas, the unions such as the Union de Trabajadores Portuarios (Port workers) Confederacion General del Trabajo (General Confederation of Labor) and the Central Unica de Trabajadores (Unified Central of Workers) have called for a General Strike since Monday, October 21st and another one Wednesday, October 23rd and October 24th and have been involved in work stoppages throughout the country, and

Whereas, many social organizations and unions are stating that any dialogue with the government under the oppressive conditions of a State of Emergency with active troops out in the streets shooting live bullets and prohibiting the free exercise of association and gatherings with an evening curfew that keeps catching workers and youth trying to get home in the grasp of the military and subject to severe penalties for being out after the curfew, and

Whereas according to the National Institute on Human Rights, the death toll is 15 and wounded, 269, detained, 1,908 and the number of disappeared is still unknown and their representatives have been prevented from going into the emergency departments to speak directly with the wounded, and are investigating reports by victims that Metro Station Baquedano was being used by the armed forces to detain and torture people and there are also videos and photos taken of excessive use of force against civilians and videos of military forces shooting people while they are running away or on the ground, of pursuing them and raiding their homes and people being run over by unmarked cars, and

Whereas, worker-to-worker and union-to-union solidarity has been a long-standing tradition of the San Francisco Labor Movement, especially as it relates to Chile with the heroic support of the Chilean people by the International Longshoreman and Warehouse Union during the dictatorship of Pinochet by refusing to load and unload ships carrying arms to Chile, and


Whereas, UPTE-CWA 9119 approved a resolution in its March 2019 Statewide Convention to support the No Mas AFP movement in Chile during the March 31st marches in Chile opposing the privatized AFP pension system and acknowledging a shared interest in defeating the privatization and learning from the very bad experiences of Chilean workers with these defined contribution schemes since UPTE members were also facing attacks on its UC pension system, and

Be it Resolved that: The San Francisco Labor Council supports the Chilean People’s movement for economic equality and political freedom and call on the Pinera government to respect the Chilean people’s full political and human rights and to send the Troops back into the barracks to allow the Chilean people to decide their destiny and create a dignified life for themselves and their children and a clean environment. 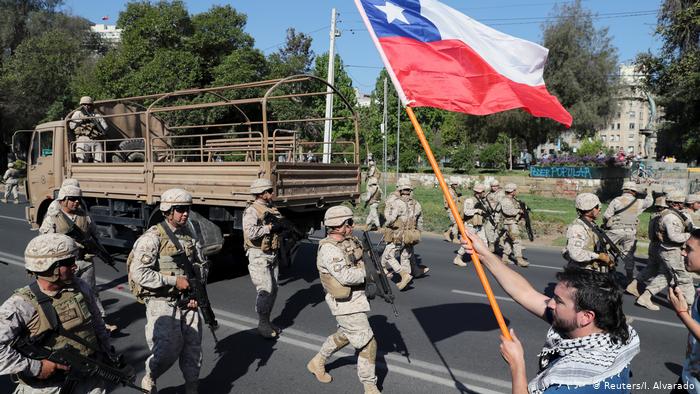 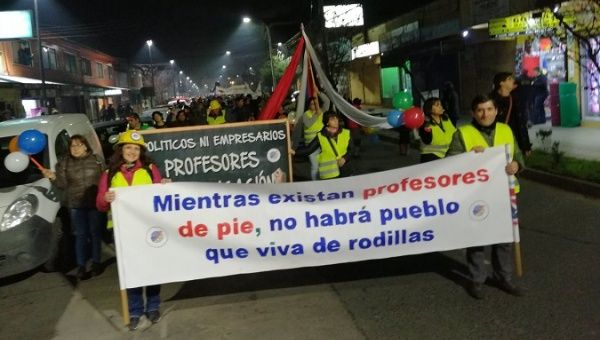 Chilean teachers are marching and fighting privatization of education which has been pushed by the United States in Chile and around the world.
https://youtu.be/6yL3QHOqabo
Add Your Comments
Support Independent Media
We are 100% volunteer and depend on your participation to sustain our efforts!