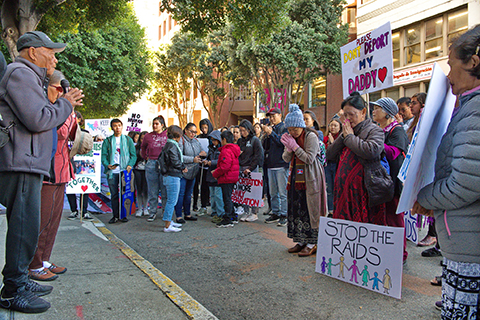 Leon Kunstenaar writes: While the concentration camps and violence at the border are in the news, the less visible, massive number of deportations from areas away from the border explodes. The racism is glaring. Unable to forgive Obama for having had the audacity of being black while President, Trump was also horrified by reports, amplified by Fox News, of the caravan of Latinos heading North.

Marketed as “border security” or defense against crime, Trump is attempting to racially cleanse the country of all but the descendants of white Europeans.... He first attempted to prevent Muslims from entering the country, for any reason, by executive order. This attempt failed as it created protests and pandemonium at airports and was declared illegal. He then tried to place asylum seekers in concentration camps, separate children, and “zero tolerance” to terrorize people into not immigrating....

At D.H.S., after much personnel turnover and turmoil, Trump no longer needs to cope with pushback from various officials resisting his policies. He is now surrounded by extreme ideologues in the mold of Stephen Miller. Rather than large headline generating raids and impressive but useless walls, he will use quiet but continual attacks on individuals enabled by “big data.”