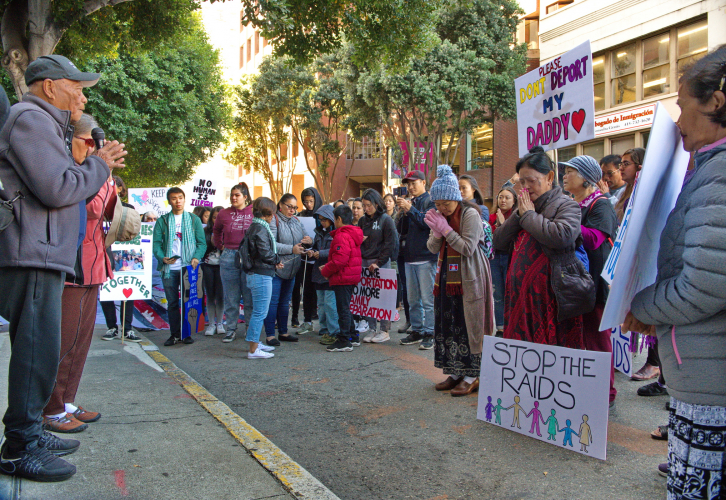 While the concentration camps and violence at the border are in the news, the less visible, massive number of deportations from areas away from the border explodes.

The racism is glaring. Unable to forgive Obama for having had the audacity of being black while President, Trump was also horrified by reports, amplified by Fox News, of the caravan of Latinos heading North.

Marketed as “border security” or defense against crime, Trump is attempting to racially cleanse the country of all but the descendants of white Europeans.

While most were shocked by the photo of a mother running with her children to escape gas, Trump’s reaction, thinking Secretary of Homeland Security Kirstjen Nielsen had ordered the attack, said to her “You’re being really tough. I had no idea you had this in you.”

He first attempted to prevent Muslems from entering the country, for any reason, by executive order. This attempt failed as it created protests and pandemonium at airports and was declared illegal.

He then tried to place asylum seekers in concentration camps, separate children, and “zero tolerance” to terrorize people into not immigrating. While this did accomplish much terror and traumatized children and parents, it placed a large strain on ICE and Homeland Security and did not do much to reduce immigration. Besides, the optics were bad. This outrage, however, continues though with a lowered profile.

The US has separated nearly 1,000 migrant children arriving at the nation’s southern border from their families despite a federal judge demanding Donald Trump ’s administration curtail the practice last year.

But part of the spike he oversaw was an accounting trick: Near the Southern border, migrants caught trying to cross were increasingly subject to formal removal proceedings (and thus officially counted in statistics), a change from previous administrations.

While Obama went only after those who had committed serious crimes, Trump is now determined to also go after those who have entered the country illegally, “illegally” now redefined as crossing the border and asking for asylum in spite of obligations under international conventions, millions will be targeted.

One of Trump’s first acts as president was to throw out his predecessor’s priority list. He issued Executive Order 13768 , “Enhancing Public Safety in the Interior of the United States,” on his sixth day in office. “We cannot faithfully execute the immigration laws of the United States,” the order reads, “if we exempt classes or categories of removable aliens from potential enforcement.” Data once used to focus on prioritized groups could now, in theory, be used against anyone, and individual officers now had a freer hand to pursue their own priorities. The results were predictable: Both the percentage and sheer number of arrests by ICE of people without criminal convictions shot upward. There were 58,010 such arrests during the administration’s first 14 months, according to an analysis by NBC News — nearly three times as many as during the preceding 14 months. Statistics compiled by Syracuse University’s Transactional Records Access Clearinghouse , meanwhile, show a significant rise in immigration cases involving long-term residents. (Zengerle, J. (2019, October 2). How ICE Picks Its Targets in the Surveillance Age. New York Times.)

At D.H.S., after much personnel turnover and turmoil, Trump no longer needs to cope with pushback from various officials resisting his policies. He is now surrounded by extreme ideologues in the mold of Stephen Miller.

Rather than large headline generating raids and impressive but useless walls, he will use quiet but continual attacks on individuals enabled by “big data.”

It was, simply put, the closest thing to science fiction I’ve ever seen in science fact: and interface that allows you to type in pretty much anyone’s address, telephone number, or IP address, and then basically go through the recent history of their on line activity. In some cases you could even play back recordings of their on line sessions, so that the screen you’d be looking at was their screen, whatever was on their desktop.

Donald Trump ‘s administration is planning to expand the collection of DNA from migrants who cross into the US, and to store the data in a huge criminal database run by the FBI.

Combining law enforcement data, DNA, immigration, and whatever else they can find such as traffic and vehicle data, facial recognition, school records, and benefit claims data, the middle of the night door knock will become even more common and frightening.

Millions of people and families, many of who have been here for years, have never broken the law, raised children, and built lives as respected members of society, will be targeted.

With the resources the Division of Homeland Security now almost entirely devoted to expelling “illegal aliens”, more legitimate concerns regarding terrorism and possible acts by hostile states will no longer matter.

GOST builds on the capabilities of commercial search engines to return publicly available electronic information (PAEI) and can flexibly incorporate results from Google, Bing, or other search engines as required.

GOST can “scan thousands of people in a matter of minutes.”

GOST can “a dossier on each individual with everything you need to know, such as web page images and keywords already highlighted.”

Live access to more than 7 billion license plate detections from Vigilant Solutions® to make data-driven connections, to enhance and accelerate your investigations.

Real-time booking information from more than 2,200 facilities and from the most complete network of 90 million historical arrest records and intake photos.

From Palantir Knows Everything About You By Peter Waldman, Lizette Chapman, and Jordan Robertson, April 19, 2018

Tapping databases of driver’s license and ID photos, law enforcement agencies can now identify more than half the population of U.S. adults.

Notice to people of Latino descent: Be careful when you order pizza.

All of the data and analytics received for LPR detection across the nation are housed in Vigilant’s cloud.

Whether you have a partial of full reading of a plate, Platesearch can help you develop leads to solve cases.

Babelstreet , Reston VA https: //www.babelstreet.com/ Note that users can scan for “sentiment”, that is, opinions.

Babel X® is a multi-lingual, geo-enabled, text-analytics, social media and web-monitoring platform designed to meet the needs of our customers by fully leveraging publicly available information in this era of overwhelming quantities of geographically diverse, multi-lingual data.

Babel X makes sense of large tracts of multi-lingual data in near real time. Babel X assigns and charts sentiment for social media in over 20 of the major world languages. Users identify themes, entities, and categories, as well as detect relationships, within the cloud based platform. Babel X users can explore the data through a wide range of analytical lenses to include geospatial, temporal, link analysis, public records search, sentiment, and topics of interest. Users can set custom alerts for topics or activity of interest.

Customers may access Babel X 24/7/365 from any computer, device, or smart phone with an internet connection and a web browser.

https://kunstena.smugmug.com/Politics/Demo...
Add Your Comments
Support Independent Media
We are 100% volunteer and depend on your participation to sustain our efforts!