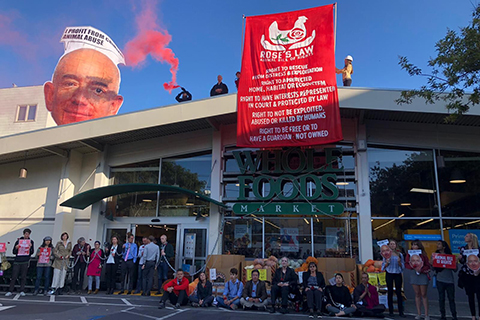 Hundreds of activists in San Francisco occupied a Whole Foods store and an Amazon office on September 30, with dozens chaining and/or locking themselves in place until thirty-seven were arrested. At the 24th Street San Francisco Whole Foods location, activists erected a rooftop fifteen-foot Jeff Bezos head, which had an “I profit from criminal animal cruelty” speech bubble. Simultaneously, several activists chained themselves together inside the Amazon office on Sansome Street in San Francisco, in an effort to further dramatize their concerns and pressure a response from Amazon.

Many of those arrested at Whole Foods and Amazon made their voices heard at city hall the following afternoon, as over 150 Direct Action Everywhere activists streamed in to address the Board of Supervisors, urging their support of “Rose’s Law: An Animal Bill of Rights.”

In response to the protests in San Francisco, Whole Foods’ parent-company Amazon filed for a temporary restraining order against the animal rights network Direct Action Everywhere, its co-founder Wayne Hsiung, and dozens of unnamed individuals and affiliates. The complaint seeks to restrain protests against the company at all California locations. Whole Foods was granted a similar restraining order for its Berkeley location in September 2018.