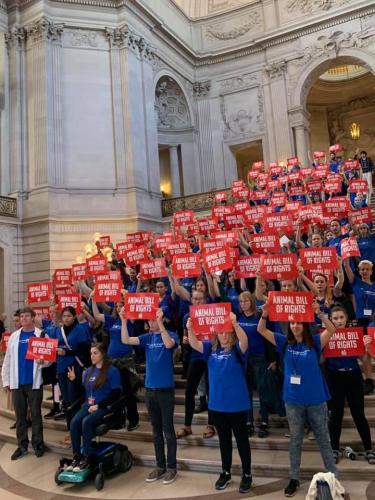 
Many of the 37 arrested at S.F. Whole Foods and Amazon locations on September 30 also made their voices heard at city hall the following afternoon, as over 150 Direct Action Everywhere (DxE) activists streamed in to address the Board of Supervisors, urging their support of “Rose’s Law: An Animal Bill of Rights.” Dozens directly addressed the B.O.S. for 1-2 minutes each.

“The Peace and Justice Commission of the Berkeley City Council has already passed a resolution supporting nonviolent activists who exposed factory farms, and disavowing the prosecution of us. And we would be so deeply grateful if this body would be willing to consider a similar resolution,” said Jonathan Frohnmayer, a former corporate attorney currently facing eight felony charges.

The resolution Frohnmayer references effectively endorses Rose’s Law and has already received the support of the Berkeley Peace and Justice Commission resolution (agenda item #9 here, full resolution text here). It is expected to go before the full Berkeley City Council within the next month, where it is likely to be largely supported. Activists have also secured a Wednesday meeting with San Francisco Supervisor Matt Haney, which they are hopeful will lead to similar support in San Francisco.

"Corporations like Amazon, as well as Sonoma county officials, continue to fail the public interest of transparency, truth and compassion for animals,” said Priya Sawhney, who faces eight felony charges for trying to rescue dying animals from factory farms. “But it’s so inspiring to see Berkeley and San Francisco stepping up with the bold progressive leadership they’re become known for."

“Animal abuse is the crime here, not animal rescue,” Sawhney said. “It’s time Amazon and other companies take a stand for transparency, integrity, and benevolence, rather than actively suplexing the truth.” 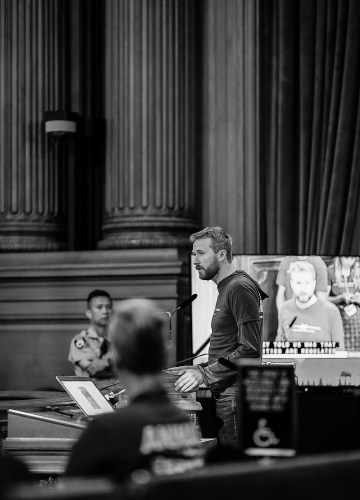 original image (1153x1600)
Photo: Former corporate attorney Jonathan Frohnmayer, who faces eight felony charges for exposing factory farm criminal animal abuse, addresses the S.F. Board of Supervisors
https://www.directactioneverywhere.com/
Add Your Comments
Support Independent Media
We are 100% volunteer and depend on your participation to sustain our efforts!