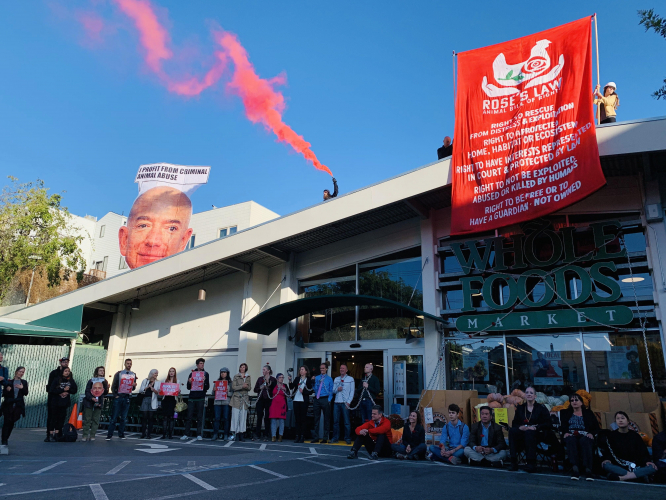 original image (4032x3024)
It didn’t take long for Amazon-owned Whole Foods to respond after protests Monday, September 30, in San Francisco garnered widespread media attention. The company has now filed for a temporary restraining order against the animal rights network Direct Action Everywhere (DxE), its co-founder Wayne Hsiung, and dozens of unnamed individuals and affiliates. The complaint, which seeks to restrain protests against the company at all California locations, was filed in Alameda County Superior Court Tuesday.

DxE says the filing is the latest in the companies’ ongoing effort to prevent exposure of disturbing animal abuse at Amazon/Whole Foods farms:

• In March 2017, a teenage animal rights activist was charged with felonies for sprinkling flower petals in a meat case at a Colorado Whole Foods. Whole Foods litigation counsel subsequently sent a letter to the district attorney asking for her punishment, and the teenager was threatened with removal from her family.

• In April 2018, Hsiung was arrested and charged with “threatening bodily injury” after asking questions at a Colorado Whole Foods about the conditions at the company’s meat suppliers.

• In June, an activist who attempted to ask Jeff Bezos to cut ties with abusive suppliers was arrested on felony charges.

The company’s 2017 acquisition by Amazon, DxE activists say, has led to a new strategy: crushing activists through litigation. DxE says the internal memos show the company’s efforts to mischaracterize peaceful protests as violent.

“Over the past 5 years, we’ve asked Amazon, Whole Foods and Jeff Bezos to sit down and discuss our findings, which are shocking and contradictory to everything they claim about the treatment of animals at their suppliers,” said Hsiung, a corporate lawyer and former Northwestern law professor. “They have refused all conversations, instead resorting to lawsuits and trumped-up criminal charges.”

Beginning in 2014, Hsiung and DxE have undertaken multiple undercover investigations of Whole Foods and Amazon suppliers, exposing what they call criminal animal cruelty at farms that include Diestel Turkey Ranch, Pitman Family Farms (Mary’s Free Range Chicken), Petaluma Farms, and Smithfield’s Circle Four. The investigations have led to thousands of complaints against Whole Foods on social media and protests across the country against both Whole Foods and its parent company, Amazon.

“Amazon is a bad corporate citizen seeking profits at any cost,” said attorney Sonya Z. Mehta of civil rights firm Siegel, Yee, Brunner, & Mehta, which is representing the activists. “These protesters are fighting for transparency from a corporation doing anything it can to keep the public in the dark.”

Whole Foods originally filed suit against DxE in 2018, resulting in a restraining order issued at five California locations. Whole Foods attorneys now seek to expand the order to include all store locations statewide.

Despite the growing number of legal cases, Hsiung and DxE say they are determined to continue their campaigns.
https://www.directactioneverywhere.com/
§Whole Foods request for restraining order
by DxE Thursday Oct 3rd, 2019 8:01 PM 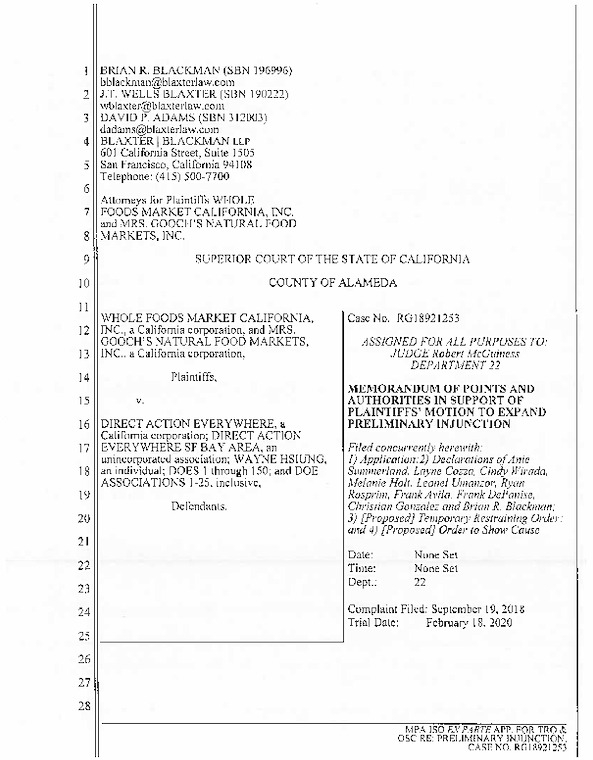 Download PDF (351.1KB)
(11-page PDF)
https://www.directactioneverywhere.com/
Add Your Comments
Support Independent Media
We are 100% volunteer and depend on your participation to sustain our efforts!