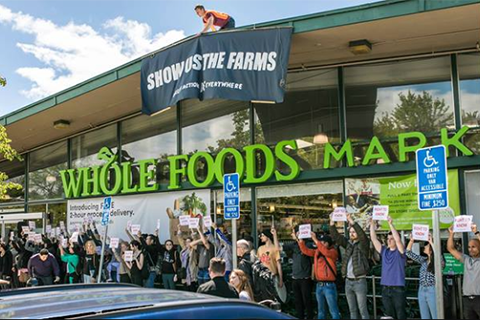 The animal rights network Direct Action Everywhere (DxE) and co-founder Wayne Hsiung, along with dozens of unnamed individuals and affiliates, are forbidden from stepping on Whole Foods property at Telegraph Avenue in Berkeley. Seeking to preempt a week of protests, on September 21, the Alameda County Superior Court granted a restraining order requested by Whole Foods Market California Inc. seeking to stop protests against the company. Whole Foods had sought to ban protests on its property throughout the entire state.

Despite the court ruling, "Occupy Whole Foods" is proceeding as planned during the week of September 23-29, with a protest presence on the public sidewalk just beyond Berkeley Whole Foods' property. A mass action is planned for this Saturday, September 29. [UPDATE 9/30: 58 Arrested on Felony Charges as Activists Occupy "Free Range" Amazon Chicken Supplier.]