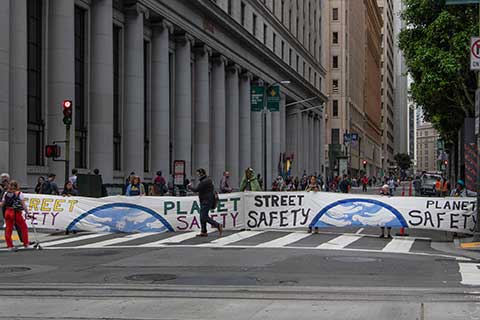 On August 30, San Francisco's Montgomery Street, normally the home of plundering corporations, became the venue of Amazon peoples' worship and demands to save their world, and ours. Montgomery Street was quickly sealed off with a street-wide banner at the 300 building, site of the Brazilian consulate.

Next to the one painted last year, with chalk on sticks, the outlines of a large "street mural" was drawn on the carless street. Others then rushed in with blue, green, yellow and light brown paint to create an image demanding the protection of a weeping Amazon forest. At the same time there were songs and prayers for salvation for earth's "mother." Dancers in full native dress did ritual dances to intense drumming.

The Amazon is burning at an unprecedented speed. Ranchers and cattle farmers are burning territory, clearing it, and creating pastures for cattle and big agriculture to take over and buy their property. If a section of the rainforest is burned to the ground, it is then open for takeover. Indigenous people, animals, and plants are all losing their homes. The action was in solidarity with all Indigenous people and territories in the Brasilian Amazon.