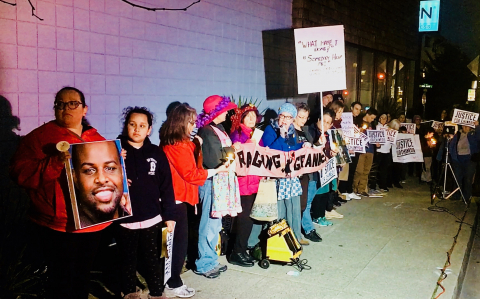 The District Attorney of San Mateo County announced on March 1 that he found four deputy sheriffs and a sheriff’s sergeant did not violate the California penal code when they killed Chinedu Okobi with tasers on October 13, 2018. This is despite the fact that the coroner classified the death as a homicide. Civil-rights attorney John Burris, who represents the Okobi family, said that law enforcement actions needlessly escalated after their loved one committed only a minor infraction.

Anti-police brutality activists who viewed video footage released by the DA's office said that Okobi appeared to be jaywalking; deputies had been ordered to enforce jaywalking laws more strictly due to recent pedestrian collisions in the area. Burris stated that the lawsuit he will file on behalf of the family will force the sheriff’s office to examine taser policy, hopefully leading to changes.

Shortly after the District Attorney announced his decision, protesters gathered at the site where Okobi was murdered, 1400 El Camino Real in Millbrae. They called for a state investigation into Okobi’s death, the establishment of a civilian oversight committee for the sheriff’s office, and the recall of District Attorney Steve Wagstaffe. The Northern California arm of the ACLU said that the incident had all the earmarks of racial profiling.