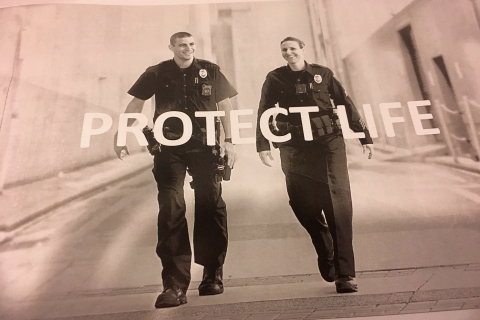 Approximately 200 concerned citizens listened to taser manufacturer Axon’s dog and pony show that was first up on the agenda at a taser study session in Redwood City on February 11. While at first they quietly listened to Axon representatives’ presentation, they couldn’t help but react with laughter when the Axon team stated that the devices cause less serious injuries than pepper spray, dogs or batons, and had never conclusively lead to a fatal electrocution.

The Board of Supervisors called for the hearing after three men of color were murdered with tasers by law enforcement in San Mateo County in 2018. The most recent death was that of 36-year-old father Chinedu Okobi, the youngest of five siblings born to Nigerian immigrants. On October 3, 2018, he was unarmed and walking down the sidewalk when San Mateo Country Sheriff deputies approached him in Millbrae. He asked, "What did I do?" and sheriffs responded by tasing him to death.

On February 13, friends, family, and activists gathered at the site where Chinedu was killed for a vigil on what would have been his 37th birthday.

Rally for Truth and Transparency After Taser Deaths in San Mateo |

Rally Prior to Taser Forum: Demand Truth and Transparency of DA/Sheriff