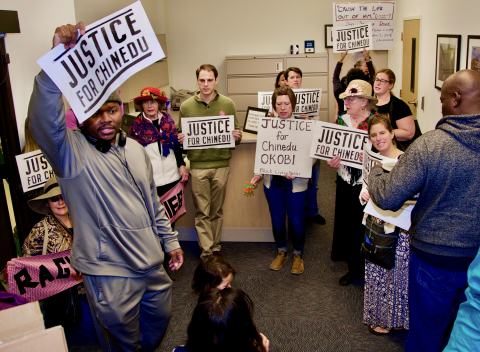 Chinedu Okobi was the third man to die after being tased by law enforcement in San Mateo County last year. He was unarmed and walking with shopping bags along the El Camino in Millbrae in October of 2018 when sheriff's deputies attacked him. Four deputies and a sergeant were involved in the 36-year-old father's death; all involved personnel are now back on duty. More than two dozen people protested his murder in the District Attorney's office on January 23, then went to the county Sheriff’s office. Their final stop was at the office of the county Board of Supervisors, where they demanded answers of the President of the Board and County Manager.

Outraged community members organized the sit-in in the lobby of District Attorney Steve Wagstaffe. They were joined by family members and friends. Protesters called for the release of videos documenting events that preceded the demise of the Nigerian-American Okobi. They called on the DA to release all evidence, including 911 call logs. The activists want an independent investigation, saying the public should be able to judge for themselves what happened that day.

There will be an outdoor rally to demand truth and transparency of the San Mateo County DA and the Sheriff from 5 to 6pm, and an opportunity for public comment at a community study session on tasers in the Board of Supervisors chambers on February 11. Both will be at 400 County Center, Redwood City.

February 11: Rally to Demand Truth and Transparency of DA, Sheriff 5 to 6pm |

Protesters Demand Justice for Chinedu Okobi in DA, Sheriff's and Board of Supes Offices | Justice4Chinedu