Add an Event
Newswire
Calendar
Features
Home
Donate
From the Open-Publishing Calendar
From the Open-Publishing Newswire
Indybay Feature
Publish to Newswire
Add an Event
Related Categories: Peninsula | Police State & Prisons
Protesters Demand Justice for Chinedu Okobi in DA, Sheriff's and Board of Supes Offices
by Taser Deaths in San Mateo
Saturday Jan 26th, 2019 3:50 AM
Chinedu Okobi was the third man to die last year in San Mateo County after being tased by law enforcement. More than 25 people sat in the lobby of the District Attorney's office on the morning of January 23 with signs and noisemakers. They swung by the Sheriff's office and then took their demands to the president of the Board of Supervisors the same day.
Top Photo: Board of Supervisors President Carole Groom, center, and County Manager, Mike Gallagy face demonstrators. 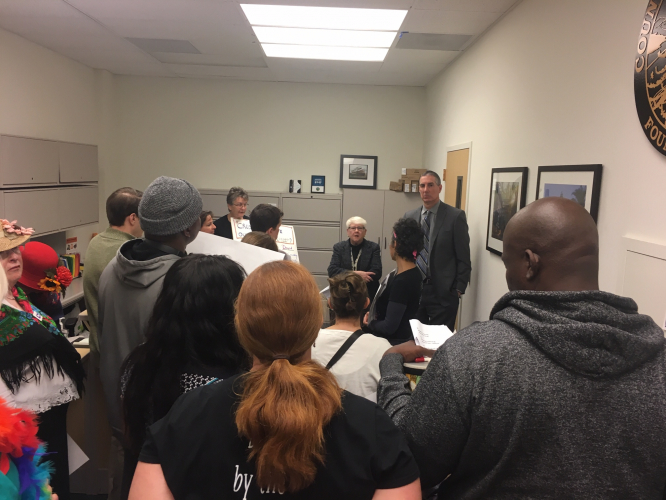 original image (2016x1512)
Hundreds of people called and emailed the Board of Supervisors, San Mateo County, after Chinedu Okobi was killed by sheriff's deputies with tasers last October. He had been walking, unarmed, with shopping bags along the El Camino Real in the city of Millbrae when he was tackled by 5 law enforcement officers.

Despite community cries for justice, there has been no action on, or commitment to, any legislation regarding a moratorium on tasers by the Board of Supervisors. Furthermore there here have been no requests by any San Mateo County Supervisors to the DA or Sheriff to release video of the assault or other evidence in the case.

This week concerned citizens took their demands directly to Board of Supervisors president, Carole Groom. After occupying the lobby outside District Attorney Steve Wagstaffe's office, the protesters went to the sheriff's office where they continued chanting and singing. Their last stop was at the office of the Board of Supervisors where they met with the newly elected president and county manager, Mike Callagy. Groom and Callagy insisted that demonstrators wait until a period of public comment to be held at a Taser Study Forum on February 11, postponed from its original January date. Protesters were persistent and peppered the two with questions about the lack of transparency in the case. 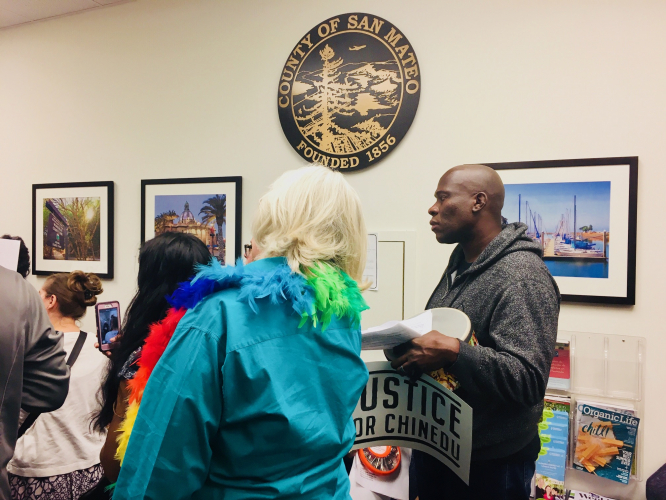 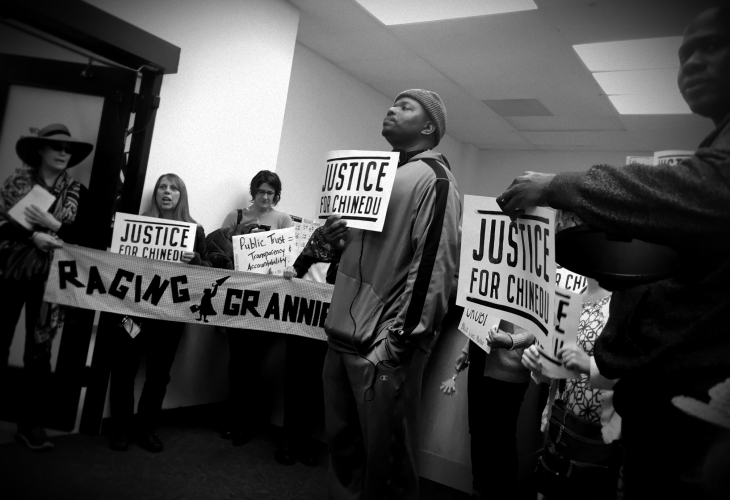 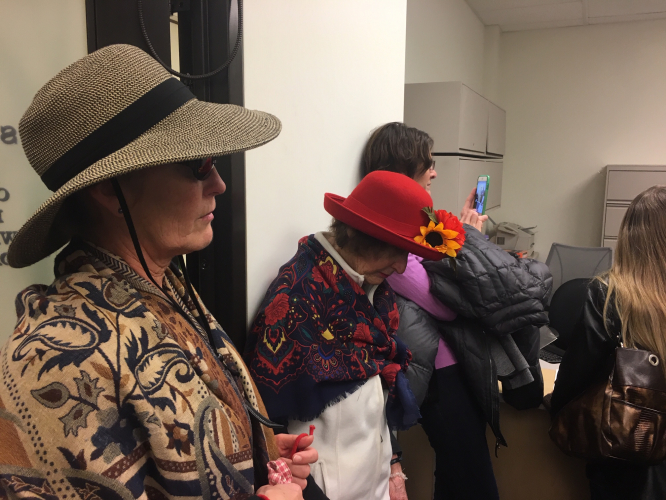 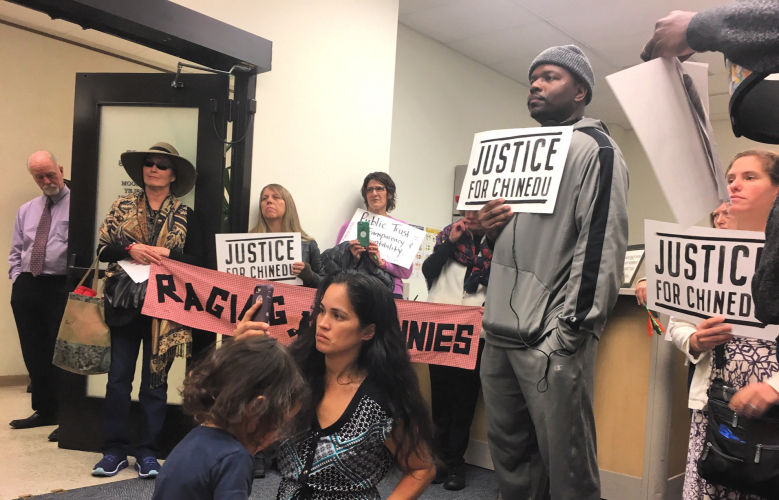 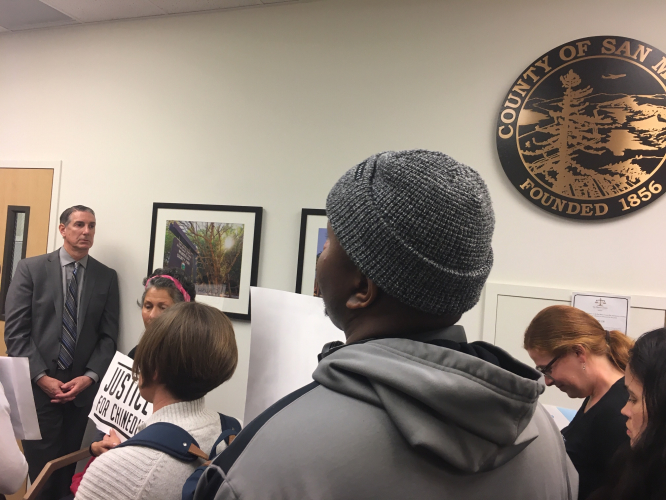 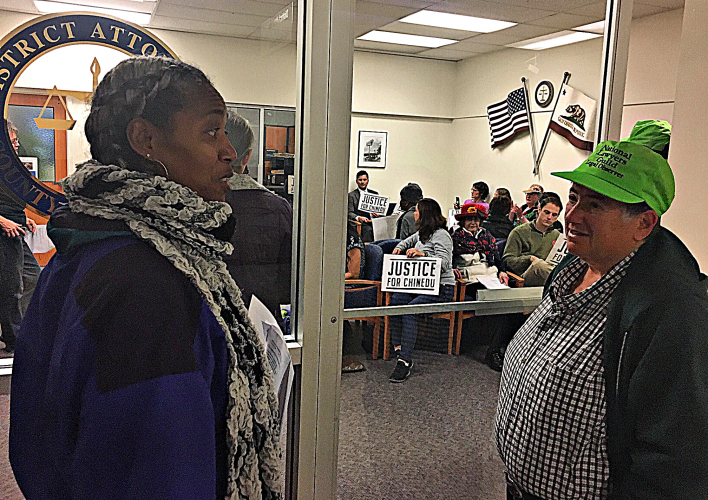 original image (2016x1422)
NLG observer in bright green hat, on hand in case of arrests, chats with a demonstrator.
§Protesters Inside DA's Office
by Taser Deaths in San Mateo Saturday Jan 26th, 2019 3:50 AM 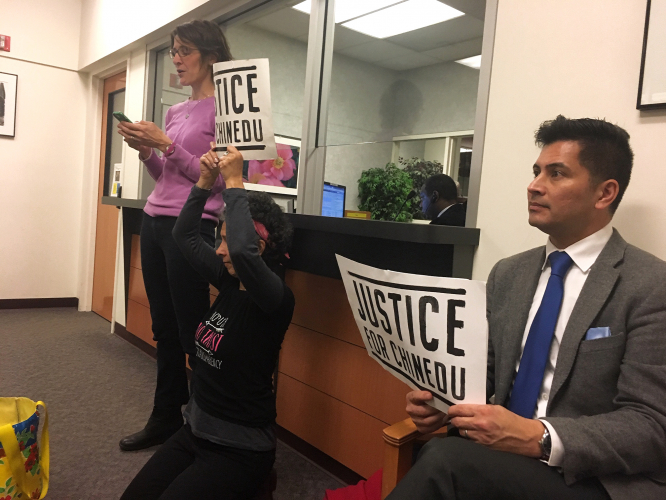 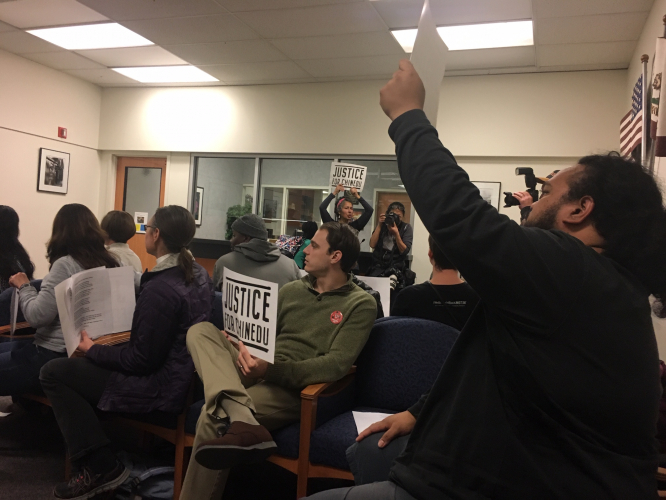