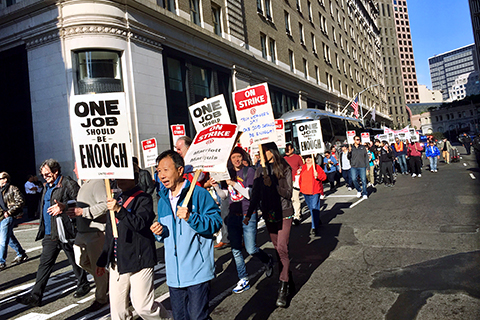 Union Members Strike Against Marriott Hotels in Eight U.S. Cities
In Bay Area, Marriott Employees in Oakland, SF and San José On Strike and Off the Job

Strikers on the picket lines at Marriott hotels in San Francisco, San José and Oakland are determined to fight poverty level wages and increased medical costs as they struggle to live in one of the most expensive metropolitan areas in America. Bay Area laborers who have walked out are joined by workers in Boston, Detroit and the Hawaiian islands of O'ahu and Maui who are striking against the world’s largest and most profitable hotel chain.

On October 20 over 3,000 workers and supporters marched through San Francisco, passing four hotels owned by the Marriott chain. Of 300 who protested with a march through downtown San José that afternoon, a contingent stayed through the night to drum, chant, and keep awake the few hotel guests who crossed picket lines to register in the hotel. Employees are picketing 24 hours a day at both hotel entrances in the South Bay location.

Many workers have to work two and three jobs and commute long hours to survive in the Bay Area, affecting their families, their health, and their safety. Marriott employees, joined by community members, chanted "One job should be enough" at rallies and wore red T-shirts with the phrase to emphasize the conditions they must endure with Marriott's low wages.

Protest Outside of San Jose Marriott |

SF Marriott Workers Strike: A Class Battle For All Workers