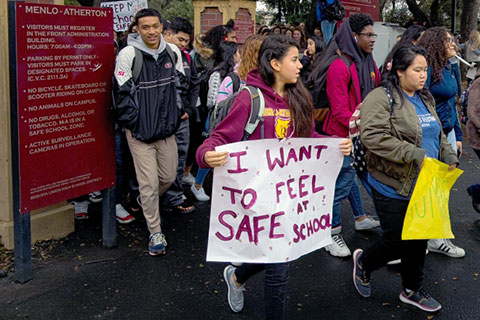 Guns are the third-leading cause of death for children in America (behind illnesses and accidental deaths from car crashes and drownings.) After the Parkland, Florida mass shooting, students organized for a national day of walkouts. In the San Francisco Bay Area, thousands participated in the walkout, with 1,500 students marching along El Camino in the suburb of Menlo Park alone.

On March 14, however, not all went smoothly for some Bay Area students seeking to express themselves. Chris Funk, superintendent of East Side Union High School District (San José), said that school administrators should allow on-campus events where students could speak. However, the Mercury News quoted Funk as saying, “Organizations have their own agendas and they’re using kids as pawns…I’m not saying it’s wrong, I’m just saying students need to understand what they’re walking out on.” He also said students need “to be clear on what they’re advocating for.”

In the East Bay, students at Mt. Diablo High School in Concord pushed through a gate to march off campus for the 10 a.m. protest after the school locked its gates saying that parents would not want their students to leave campus. School administrators chased after the students, insisting that they return to campus and threatening to call their parents. They then relocked the gates.

Similar attempts to infringe on students’ first amendment rights were reported as well. At Santa Teresa High School in San Jose, principal Greg Louie sent a note to families saying that “if students leave campus, we will not restrain them, but they will receive a Saturday School referral for violating the closed campus policy.”

Teachers and Students Numbering 800 Walk Out from San Mateo High

Related Features: March For Our Lives in Washington D.C. and Hundreds of Cities Worldwide | From School Shootings to Revolutionary Social Transformations