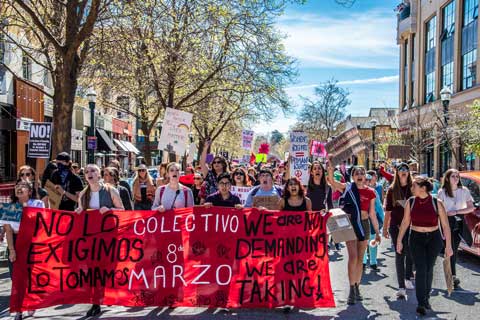 On March 8, striking community members marched through downtown Santa Cruz in solidarity with Women's Strikes organized around the world on International Women's Day as a follow up to the massive Women's Marches held on January 21, 2017, the day after the Inauguration of Trump.

Multiple events were planned for International Women's Day in Santa Cruz. The downtown march began at Louden Nelson Center and made its way to the Santa Cruz Town Clock where speakers were heard in front of the clock and in the street, where many of the participants held space at the big intersection at Water and Pacific. Streets were blocked for nearly an hour and a half.

One group participating in the March 8 demonstration was the UCSC March Collective, who invited the public to join in the call for solidarity with, "women, trans and queer people, muslims, immigrants, people of color, sex workers, survivors of violence, currently and formerly incarcerated people, and oppressed people everywhere." The march collective invited people of all genders to join the action, stating in an event announcement that, "We strike because we can't afford not to care."