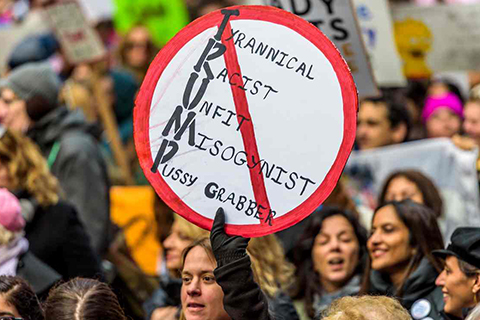 The massive women’s marches of 21 January may mark the beginning of a new wave of militant feminist struggle. But what exactly will be its focus? In our view, it is not enough to oppose Trump and his aggressively misogynistic, homophobic, transphobic and racist policies. We also need to target the ongoing neoliberal attack on social provision and labor rights.

While Trump’s blatant misogyny was the immediate trigger for the huge response on 21 January, the attack on women (and all working people) long predates his administration. Women’s conditions of life, especially those of women of color and of working, unemployed and migrant women, have steadily deteriorated over the last 30 years, thanks to financialization and corporate globalization.

Let us join together on 8 March to strike, walk out, march and demonstrate. Let us use the occasion of this international day of action to be done with lean-in feminism and to build in its place a feminism for the 99%, a grassroots, anti-capitalist feminism – a feminism in solidarity with working women, their families and their allies throughout the world.

Solidarity with the women of Rojava in Oakland, 5pm |