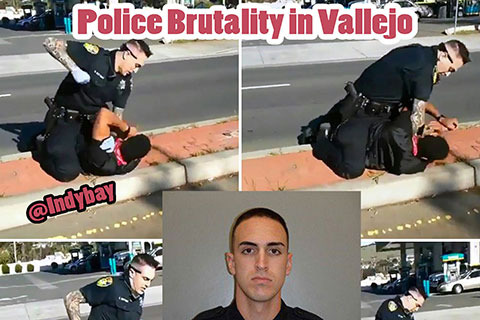 Police Brutality Captured on Video in Vallejo, California
Vallejo Cop Spencer Bottomley Assaults Person Who Had Sat Down and Surrendered

On March 11, 2017, videos were uploaded to social media showing police in Vallejo, California brutalizing an individual who may have been experiencing mental health issues. The incident took place Friday, March 10 on Fairgrounds Drive in front of the Valero gas station. The Vallejo police officer captured on video punching and bashing with a flashlight has been identified as Spencer Bottomley, an ex-Marine. He graduated from the Napa Valley Police Academy on June 13, 2015. The officer was recognized for his leadership, problem solving and communication skills.

Spencer Bottomley was named in another brutality case, Derrick Lamoris Shields vs. City of Vallejo, for an incident on the night of April 11, 2016. The statement of claims from that night in 2016 is strikingly similar to the brutality captured on video during the day in 2017. According to the statement of claims in Shields vs. City of Vallejo, a group of five Vallejo police officers "violated Plaintiff's rights under the Fourth Amendment of the United States Constitution and California State law, when they subjected Plaintiff to excessive and/deadly force and assault and battery." The actions of all five officers is described, including those of officer Bottomley, "Defendant Spencer Bottomley struck Plaintiff with his flashlight all over Plaintiff's body."

Northbay Uprising Media Collective recalls, "Vallejo Police got away with over 10 murders in the year 2012, and are known to surveil and harass family members of victims, and members of the local Copwatch project."

Ali Winston, a reporter on surveillance, privacy and criminal justice notes, "Vallejo PD have a sky high rate of police shootings. Far surpasses any other Bay Area city PD on a per capita basis."

April, Bay Area born and raised, observed, "This is my city. To anyone that lives here, unfortunately this isn't shocking."

Foreshadowing the future, on June 26, 2015 Northbay Copwatch wrote, "Vallejo Police has hired three ex-Marines to patrol the streets. Time will show if these three will treat their new settings as a war zone, with the People as potential enemies."