Add an Event
Newswire
Calendar
Features
Home
Donate
From the Open-Publishing Calendar
From the Open-Publishing Newswire
Indybay Feature
Publish to Newswire
Add an Event
Related Categories: California | Central Valley | East Bay | San Francisco | U.S. | Media Activism & Independent Media | Police State & Prisons
Indybay Refuses to Bow to Demand to Remove Vallejo Copwatch Post
by Indybay Volunteers
Sunday Nov 18th, 2012 7:16 PM
Attorney David E. Mastagni of the Sacramento law firm Mastagni, Holstedt, Amick, Miller & Johnsen has demanded that the San Francisco Bay Area Independent Media Center (Indybay) remove a post by Vallejo Copwatch. It is unclear on whose behalf the overly broad demand was made as it requests that Indybay "remove any and all information pertaining to public safety officers employed by the City of Vallejo." The specific Vallejo Copwatch post listed in the demand letter, though, identifies Vallejo police officer Dustin B. Joseph as the killer of Mario Romero on September 2nd of this year. The Indybay Collective has no intention of removing the post. 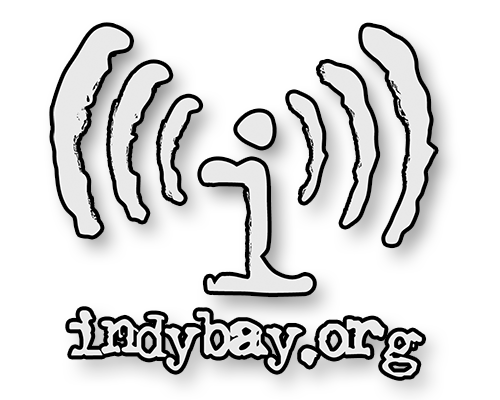 The Vallejo Copwatch Post and the Disingenuous Demand for Removal

The Vallejo Copwatch post entitled "Vallejo Police Officer who murdered Mario Romero has been identified" states that "On September 2, 2012, Mario Romero was approached and gunned down while sitting in his parked car in front of his home by a Vallejo Police Officer, identified by multiple witnesses as Officer Dustin B. Joseph (age 32)." The post additionally lists a number of prior complaints against officer Joseph reportedly found in public records.

As is common in letters from lawyers demanding the removal of content, citations of law are used erroneously in an attempt to intimidate the Indybay Collective into removing the objectionable material. In the case of the recent Vallejo Copwatch post, attorney David E. Mastagni refers to California Government Code Section 6254.21:


Yet there is no home address or telephone number listed within the post. The demand letter seems to deliberately conflate "personally identifying information" with the officer's name and alleged record of complaints on public record. The same could be said for another penal code cited in the letter, 146e, which forbids the disclosure of residences or telephone numbers with the intent to obstruct justice or cause or threaten physical injury to police officers. Similarly, the implied mention of misdemeanor and/or felony charges for "posting personally identifying information" confuses the issue that Indybay was not the entity which created the post; it originates from a third party.

Oddly, the demand letter cites the federal RICO Act as it informs Indybay that the "individuals who have contributed the above-linked content on your site have also posted the same information on other websites." Indybay is certainly not aware of every other posting on every other website and could not be held responsible for such content as part of some sort of "conspiracy," regardless of David E. Mastagni's threat of potential civil and criminal liability.

A quick search of his own firm's website reveals, amongst other things, that David E. Mastagni is "an experienced PORAC Legal Defense Fund panel attorney." And who is PORAC? Well, PORAC is the Peace Officers Research Association of California, a powerful police lobby with enough clout to bully state officials and legislators into passing or defeating laws as PORAC deems in its own interests.

For instance, when BART was developing a new police oversight model after the murder of Oscar Grant by BART police officer Johannes Mehserle, PORAC was instrumental behind the scenes in assuring that the new oversight body would be as powerless as was politically possible for BART at the time, that it would end up with no authority to discipline problematic officers. On the other side of the equation, PORAC used it's Legal Defense Fund to pay for Mehserle's expenses as he was tried for the murder of Oscar Grant.

David E. Mastagni's work with PORAC makes it clear that his is not just any old attorney jumping on in defense of Vallejo police officer Dustin B. Joseph and/or his allies, who apparently do not want the officer's name made public, nor his alleged record of misconduct complaints. David E. Mastagni can be assumed to be experienced at wielding the law, correctly or incorrectly, on behalf of police clients facing professional and public criticism for their on-duty actions.

The San Francisco Bay Area Independent Media Center, more commonly known as Indybay, was founded in the year 2000. Along with the international Independent Media Center network, Indybay was a pioneer of open publishing on the internet, creating a space for people to publish their own articles, photos, video, audio, and PDFs online years before corporate websites such as Flickr, Scribd, and YouTube appeared. Perhaps it is not surprising — considering the radical nature of content posted by journalists and activists to Indybay.org — but over the course of these past dozen years, there have been numerous requests to remove content published by Indybay users. The all-volunteer Indybay Collective, however, regularly rejects such requests. Lawyers from the American Civil Liberties Union of Northern California (ACLU-NC), the Electronic Frontier Foundation (EFF), and other public interest and civil rights attorneys have been reliable allies of Indybay when needed to beat back these bogus and sometimes illegal requests to silence speech.

In 2003, in an attempt to stop the spread of leaked internal documents online, election voting machine manufacturer Diebold issued a cease and desist to Indybay's web service provider at the time, the Online Policy Group (OPG), making copyright claims supposedly based on the Digital Millennium Copyright Act (DMCA). The Indybay Collective and the OPG refused to delete the content. While the document archive is no longer online at the original location, the Indybay post remains to this day. On OPG's behalf, the EFF sued Diebold for having violated sections of the DMCA, leading to a sizable payment by Diebold in the case.

More recently in 2011, an Indybay post from a Texas animal rights activist entitled "Amanda Lollar commits animal cruelty at Bat World Sanctuary" led to demands for removal and legal threats. But the ACLU told lawyer Randy Turner that Indybay would not be removing the animal cruelty article:


Beware of the Corporate Media

This steadfastness in defense of radical content is not commonly found across the internet. While the demands made of Indybay had no legal merit in the Bat World case, YouTube received the same or similar requests and voluntarily removed all related videos. It is easier, and cheaper, for corporate websites to simply comply with these bogus requests rather than to defend your right to openly publish content which is not in and of itself illegal. YouTube's parent company Google went so far as to remove search listings pointing to the original and related articles on Indybay. Even today, when Google searches are done for those Indybay posts, the following message appears at the bottom of the results listed: "In response to a legal request submitted to Google, we have removed 3 result(s) from this page." Corporate sites have a well-established history of taking down radical content and suspending accounts.

Besides the obvious problem of patronizing large for-profit corporations which often work against the interests of social justice, corporate websites universally track users' online behavior with a variety of methods. One such method is known as a browser "cookie", a small piece of tracking data placed on a computer by websites and companies that serve online advertisements. Most internet users are largely unaware that cookies are tracking them on individual sites and across the web. And not only are there browser cookies in most web pages, but there are also Flash cookies, meaning that YouTube and its advertisers can not only track you when you visit YouTube, but they can track you on any site which embeds a YouTube video.

Furthermore, these companies routinely hand over the personally identifiable information they collect to law enforcement or other corporations, whereas Indybay values your security and privacy in ways such as not logging the IP addresses of those who post to the site. Additionally, Indybay does not allow the embedding of Flash video or similar SWF content due to the prevalence of Flash cookies. When time allows our technical volunteers to implement it, in the near future Indybay will also no longer allow embedded images hosted on other web sites as they allow tracking of IP addresses from the servers hosting those images.

It should be known that Indybay has received several requests over the years requesting identifying information about the authors of anonymous posts of interest to law enforcement authorities. If any response is made, the Indybay Collective or its various legal representatives inform authorities that the website does not record identifying information such as IP addresses. Indybay must, however, under penalty of law, remove content which in and of itself is illegal, such as posts containing specific and direct physical threats against persons and posts which include the home addresses of animal vivisectionists, vivisectors having had a special law written for them, the California Animal Enterprise Protection Act, which went effect on January 1st, 2009. The Indybay Collective usually redacts or removes in its entirety content of this "illegal" nature without demands from lawyers or law enforcement.

And So It Goes

The request by David E. Mastagni to remove the Vallejo Copwatch post is not the first time corporations and law enforcement authorities have requested content they don't like be removed from Indybay, and surely it won't be the last. Indybay, however, fully intends to continue to reject such requests — and to steadfastly defend your right to publish your own news in your own words.

Publish Your News, Photos, Video, Audio, and PDFs || Announce Your Events on the Indybay Calendar || Donate and Become a Friend of Indybay


The San Francisco Bay Area Independent Media Center is an all-volunteer grassroots organization committed to using media production and distribution as a tool to promote social and economic justice. The IMC is a truly cooperative effort of hundreds of independent journalists and media activists. We are neither owned nor funded by big conglomerates, foundations, or advertisers — that's why we need your support to sustain our efforts!
http://www.indybay.org
§Re: DEMAND FOR IMMEDIATE REMOVAL OF PEACE OFFICERS’ INFORMATION FROM ELECTRONIC SITE
by Indybay Volunteers Sunday Nov 18th, 2012 7:16 PM 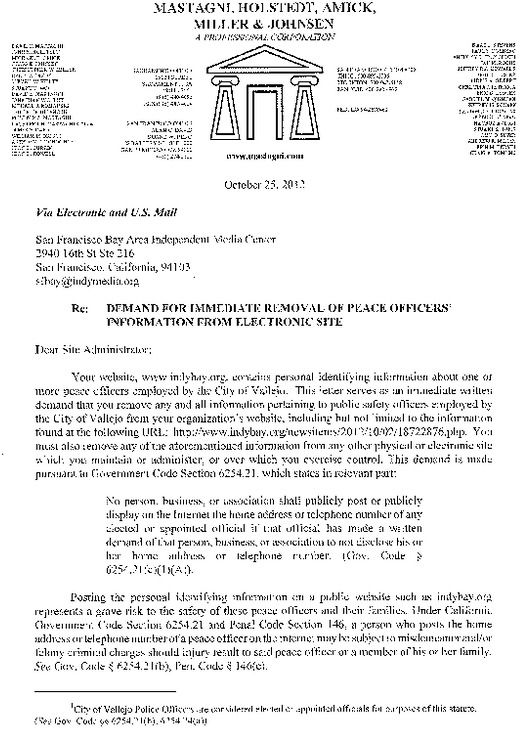 Your website, http://www.indybay.org , contains personal identifying information about one or
more peace officers employed by the City of Vallejo. This letter serves as an immediate written
demand that you remove any and all information pertaining to public safety officers employed by
the City of Vallejo from your organization’s website, including but not limited to the information
found at the following URL: http://www.indybay.org/newsitems/2012/10/02/18722876.php . You
must also remove any of the aforementioned information from any other physical or electronic site
which you maintain or administer, or over which you exercise control....

Yours truly,
MASTAGNI, HOLSTEDT, AMICK,
MILLER & JOHNSEN
DAVID E. MASTAGNI
Attorney at Law
http://www.indybay.org
Add Your Comments
LATEST COMMENTS ABOUT THIS ARTICLE
Listed below are the latest comments about this post.
These comments are submitted anonymously by website visitors.