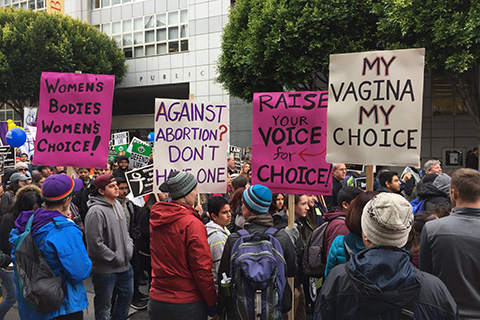 On January 21, religious extremists once again held their annual anti-abortion Walk For Life march in San Francisco. They believe holding these events in liberal San Francisco packs a bigger punch because San Franciscans by and large believe that no laws or religion should govern decisions about their bodies and their health and their welfare. A larger similar event was held in Washington D.C. on January 27, where Mike Pence became the first Vice President ever to address the gathering in person.

The participation of presidential administration members in the March for Life is not unprecedented. In 2003, former President George W. Bush offered a formal greeting speech to the rally via telephone. In 1987, former President Ronald Reagan did the same.

Since 2005, the religious community has held their annual "Walk For Life" marches in San Francisco. They come in buses from across California and the western United States. They walk through the streets spewing anti-abortion rhetoric, and every year they are confronted by pro-choice protesters. This year there were dueling events in San Francisco that day, with the huge Women's March also taking place.

Related Features: Millions of Women Take a Stand Against Trump the Day After Inauguration | Anti-Abortion Forces Bused in to San Francisco Counter-Protested by Pro-Choice Activists (2016)