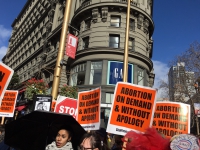 On January 23, hundreds of local activists met the anti-choice Walk for Life at Market and Powell Streets, shouting down their repressive message with loud, spirited, no-holds-barred pro-choice chants. The religious-based walk busses in thousands of anti-choice activists annually on the anniversary of Roe v Wade in an attempt to drown out locals in the pro-choice city of San Francisco.

Walk for Life marchers are told to keep eyes forward and not engage with their adversaries, but some members of the anti-abortion group giggled, pointed and stared when they witnessed a counter-demonstrator in a clever vagina costume on the sidewalk alongside their march. The two sides were kept apart by a long line of policemen with riot gear. Other street theater tactics included women wearing bloodied white pants and men waving hangers. One of the Raging Grannies held up a twisted wire hanger and a knitting needle shouting, "illegal abortions...never again!"

Stop Patriarchy organized the pro-choice response for the second year in a row, bringing a renewed radical presence to the annual event. The Walk for Life has marched through San Francisco since 2005.