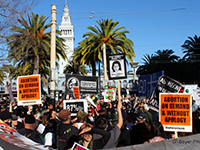 The war over abortion once again hit the streets of San Francisco on January 24. Ever since 2005 the anti-abortion religious community has been holding an annual gathering called the Walk for Life on or near the anniversary of the Roe vs Wade Supreme Court decision. They believe holding those events in liberal San Francisco packs a bigger punch because San Franciscans by and large believe that no laws nor religion should govern decisions about their bodies and their health and their welfare. But the pro-lifers come in buses from all over California and other parts of the West to push their message that “abortions should be banned by law."

Before abortion was legal, "back-alley", "backstreet", or "back-yard" abortions were dangerous and sometimes deadly for both fetus and mother. Unsafe abortions are believed to have caused “approximately 69,000 deaths and millions of injuries annually,” which is why San Franciscans confront, scream-down, and protest the "Walk for Life" event. Only a small group of SF’ers, compared to the pro-lifers, get out and counter-protest, but they still do it every year.

CONFRONT the Woman-Haters! OPPOSE the Walk for "Life" |

Oakland: Abortion is Liberating! Not 'genocidal'. Resist the anti-abortion movement!