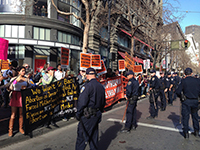 In 2013, twenty-two states implemented seventy abortion restrictions, and over eighty abortion clinics were shut down across the country. It was a record year for the dismantling of women's reproductive rights. 2013 was also a year that saw some resistance emerge against the assault on abortion rights and the war on women. Thousands were involved in different ways in getting the message "Abortion On Demand and Without Apology" out far and wide in opposition to the continued and escalating assault on this basic right.

On Saturday January 25, the "Walk for Life" came back to San Francisco to protest the right to abortion and to celebrate the recent successes of the anti-abortion movement. They marched down Market Street, where lampposts currently sport the slogan "Abortion Hurts Women." Stop Patriarchy called on people to stand up in uncompromising opposition to the "Walk for Life West Coast." A Women's Rights march was also held in Los Altos.

Women sing "No More Dying in Back Alleys", March for Choice on Anniversary of Roe v. Wade |